In her commentary, the writer says the leader of the Congress party is coming of age as a politician.

In the last one year after taking over the reins of the Congress party, Rahul Gandhi has gained in stature.

His acceptability in the party is complete.

A more confident and aggressive Gandhi has taken control of the organisation and is seen to be leading from the front.

Gandhi's transformation from an object of ridicule to a leader who is seen as a political fighter is notable.

Has Rahul come of age?

Many feel that his 'Pappu' (an old Indian nickname used for innocent boys) days are now behind him after the party's impressive election wins in Rajasthan, Madhya Pradesh and Chattisgarh last month.

The opposition leaders are also watching the Gandhi scion growing in his new job. 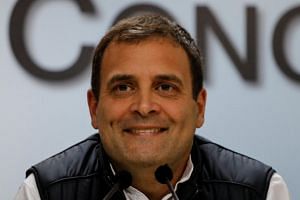 The coming of age of Rahul Gandhi: Daily Star columnist

The election results have opened up the possibilities of Rahul anchoring the opposition.

It has also dramatically altered the equation with the powerful regional satraps.

This feat has enthused not only Rahul Gandhi and his mother Sonia Gandhi but also the party, which had been demoralised for the past four and a half years.

Gandhi's coming of age as a politician is visible in the fact that he and his party steadfastly refused to respond to the ruling Bhartiya Janata Party's (BJP's) polarising narratives like Ram temple.

The party has realised that biting such baits would only consolidate the Hindu votes in favour of the BJP.

But what surprised every one was his aggressive attack in Parliament on the controversial Rafael defence deal this week both while initiating the debate and during his intervention.

He has targeted none other than Prime Minister Narendra Modi whom he has accused of corruption in the purchase of 36 Rafael jet fighters from the French company Dassault.

It is clear that Rahul has thrown down the gauntlet to send a political signal that he is ready to challenge Modi electorally.

Several party MPs were seen nodding their head when he took on the Prime Minister in the house.

His great-grandfather Jawaharlal Nehru, his grandmother Indira Gandhi and even his father Rajiv Gandhi had performed well in Parliament. (All three had served as prime ministers).

Even Sonia Gandhi, though she used to read from a script initially, had improved as the years went by.

Therefore becoming a tolerably good parliamentarian is important for Rahul Gandhi if he wants to make a mark in politics.

No doubt Gandhi surprised many in the Lok Sabha when he spoke on the no-confidence motion against the Modi government in July last after which he walked over to the Prime Minister and hugged him.

This time there was no such drama and he confined himself to what he claimed were facts on the issue in a speech which even had some humour.

2018 was the year Rahul came into his own as a campaigner and strategist, emerging as a powerful voice in the opposition against Modi.

In the last one year, he has focused on farmer's distress, unemployment and the Rafael deal and on the issue of corruption more than anything else.

Secondly, Rahul has concentrated on strengthening the organisation.

He has distributed work among younger leaders and has created a system where weekly reports are directly sent to him.

Even in ticket distribution, Rahul went by the internal survey.

Thirdly, Rahul has turned to the old guard, advising young Turks to remain patient for their turn, and has chosen senior leaders like Baghel, Ashok Gehlot and Kamal Nath as chief ministers of the newly won states.

At the same time he has also given work to younger leaders.

Often accused of taking advice from "non-politicians", Gandhi is now consulting more people and getting feedback from various sources.

Rahul's aim is also to position himself as an alternate to Modi.

This is why Rahul Gandhi has been leveling direct charges against the Prime Minister.

The BJP is going to fight the 2019 polls on Modi's personality.

The Congress is going all out to give an image makeover to Rahul as a challenger to Modi.

Team Rahul has been busy recasting him in a new 'aam aadmi politician' image.

Gandhi consistently attacked Modi on issues linked to the common man and stepped up his efforts to portray the BJP leader as a 'friend of the rich' and his government as a 'suit-boot ki sarkaar'.

Rahul has changed his style of functioning and has become more accessible to his party workers and also to the media.

Fifthly, realising that the Congress would need all the support to oust Modi, Gandhi changed the Congress stance of projecting Rahul as the prime ministerial candidate and declared that the decision will be taken after the polls.

He has been interacting with opposition leaders to build a common platform against the Modi government.

A year ago, the 2019 election was viewed as a foregone conclusion.

Now the result looks wide open, as it is no more a cakewalk for Modi.

With elections round the corner, both sides will sharpen their attacks on each other in the coming weeks.

The writer is a senior journalist. The Statesman is a member of The Straits Times media partner Asia News Network, an alliance of 23 news media entities.