Businessman is $1.9b in debt after airline venture fails; now in 'forced exile' in London

India's flamboyant businessman Vijay Mallya once said that his extravagant lifestyle was "carefully crafted" to promote a business empire that ranged from beer and spirits to an airline and the Sahara Force Formula One team.

Everyone wanted to be invited to his parties and it is no wonder: Pop star Lionel Richie performed at his 50th birthday bash and, in December last year, he flew in pop singer Enrique Iglesias for his 60th birthday celebrations.

But the party is over.

The businessman has racked up bank debts of more than US$1.4 billion (S$1.9 billion) through Kingfisher Airline, his airline business which went bust three years ago.

Mr Mallya left India on March 2 in the midst of a massive political uproar, flying to Britain where his son, Siddharth, is enrolled in acting school.

His public image also took a hit when he failed to pay hundreds of Kingfisher employees. Some of them had stayed on for over six months, thinking the airline would overcome its troubles. In an open letter in March, former employees told him "you stabbed us in the back".

This took place as a consortium of 17 banks led by the State Bank of India initiated action to recover the loan, making Mr Mallya a symbol of bad debt in corporate India and a cautionary tale for banks.

Numerous newspaper stories since have detailed how banks gave a long rope to rich businessmen while highlighting the plight of poor people being harassed for defaulting on their loans.

One of the most dramatic contrasts was the story of a Tamil Nadu farmer who was beaten up by the police for defaulting on a loan of 130,000 rupees (S$2,600).

Still, Mr Mallya, a member of the Upper House of Parliament, is now feeling the heat.

A Mumbai court last week issued an arrest warrant - with no chance of bail - in a money laundering investigation.

This was followed by the government suspending his diplomatic passport. The Ministry of External Affairs has asked Britain to deport him.

Though deportation is a long, complicated process, Mr Mallya has made it clear that he is in no hurry to return to India. He told The Financial Times newspaper in London that he was in "forced exile".

"We have always been in dialogue with banks saying: 'We wish to settle.' But we wish to settle at a reasonable number that we can afford and banks can justify on the basis of settlements done before."

He added: "By taking my passport or arresting me, they are not getting any money."

Like the Kingfisher beer tagline - "King of the Good Times" - Mr Mallya, who did his schooling in Kolkata and graduated in commerce from a Mumbai college, has long lived a "king-sized" life.

He was just 28 when he became the chairman of UB Group - which owned India's largest liquor company, United Spirits - after the death of his father Vittal Mallya in 1983.

Over three decades, the businessman built up the liquor business, even acquiring Glasgow-based Whyte & Mackay in 2007, and was an example of India's growing global corporate presence.

In his personal life, he divorced his first wife Sameera Tyabjee, the mother of Siddharth, his heir, by the early 1990s and later married Rekha, with whom he has two daughters, Leana and Tanya.

Mr Mallya also dabbled in politics, joining the Janata Dal. He left the party in 2010 and was nominated to the Upper House as an independent twice, with his second term due to end this year.

He allowed the media to feature his fabulous homes, including a sprawling seaside property in southern Goa state, which has multiple indoor and outdoor swimming pools, a helipad, a bar and discotheque.

Mr Mallya travelled the world on his private jet, even offering free rides to fellow MPs whenever he attended Parliament and had to return to Bangalore or any other city.

In 2009, he reportedly sent a bottle of whiskey - Black Dog - to all MPs in the Upper House for Deepavali.

He also donated gold for plating the interiors of Venkateswara Temple, the country's richest temple.

His troubles really started when he entered India's notoriously difficult aviation sector. He launched Kingfisher Airlines, which was named after his company's beer, on Siddharth's 18th birthday. 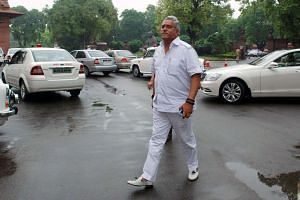 The airline ran for seven years and built a reputation for perks such as free meals and valet services but flew against the trend of budget airlines and, by 2012, it was done in by high fuel costs - which make up 50 per cent of operating costs.

That same year, Mr Mallya sold most of his shares in United Spirits and gave management control to Britain's Diageo.

His public image also took a hit when he failed to pay hundreds of Kingfisher employees. Some of them had stayed on for over six months, thinking the airline would overcome its troubles.

In an open letter in March, former employees told him "you stabbed us in the back".

"You say you are a God-fearing person. How does your God permit you to have lavish birthday parties, and this lavish lifestyle, when you didn't fulfil your duty of paying salaries to your employees?" they wrote.

Even after being labelled a "wilful defaulter" by the State Bank of India, Mr Mallya still threw himself that lavish 60th birthday bash.

The extent of his current personal wealth remains a matter of speculation. Still, analysts believe the government needs to look at the problems in the system that led to banks giving bad loans.

"...we take sadistic pleasure thinking somebody who was rich and has a good life, (has) taken a knock," said Mr Shriram Subramanian, the founder of inGovern, a governance research firm.

"If money laundering or corruption is proven, of course the case will take a different turn. We should learn from the Mallya case and apply the learning to other business houses and banks."

A version of this article appeared in the print edition of The Straits Times on May 02, 2016, with the headline 'Party's over for India's beer and spirits tycoon'. Subscribe
Topics:
More
Whatsapp Linkedin FB Messenger Telegram Reddit WeChat Pinterest Print Purchase Article Copy permalink