The meeting in New York between Indian Foreign Minister Sushma Swaraj and Pakistan's Shah Mehmood Qureshi - on the sidelines of the annual UN General Assembly debate - was confirmed only last Thursday. But a day later, India called off the meeting.

The Foreign Ministry in New Delhi blamed the cancellation on recent actions that had revealed Pakistan's "evil agenda" and the "true face" of Mr Khan.

New Delhi said it cancelled the talks after the "latest brutal killings of our security personnel by Pakistan-based entities" and the recent release of a series of Pakistani postage stamps "glorifying a terrorist and terrorism".

India did not specify which killings it was referring to, but earlier last week, an Indian border guard in the disputed territory of Kashmir was killed and his body mutilated. Three policemen were then found dead last Friday after being abducted in Indian-administered Kashmir.

In a statement from its Foreign Office, Pakistan last Friday said it had "nothing to do with" the deaths, accusing India of spreading "motivated and malicious propaganda". Pakistan also described India's reasons as excuses to enable it to avoid holding talks before national elections next year. 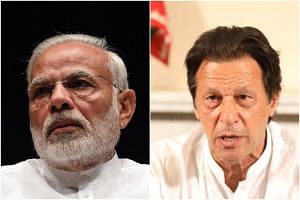 Mr Khan, a former national cricket captain, followed up on Twitter, posting on his official account: "Disappointed at the arrogant and negative response by India to my call for resumption of the peace dialogue.

"However, all my life I have come across small men occupying big offices who do not have the vision to see the larger picture."

India has long accused Pakistan of arming rebel groups in Kashmir, a Himalayan territory divided between the two countries but claimed in full by both.

Pakistan and India have fought two of their three wars since independence from Britain in 1947 over the region.