ISLAMABAD (REUTERS) - Cricket star-turned-politician Imran Khan is hoping to become Pakistan's prime minister after 20 years of being dismissed at the polls, as the country prepares to vote in a tense election pitting him against the party of jailed ex-premier Nawaz Sharif.

Just over a decade after the end of Pakistan's most recent era of military rule, Wednesday's vote features competing narratives of democracy amid Sharif's accusations elements of the powerful army are working to throw the race to Khan, which he denies.

Khan, 65, has hailed Sharif's conviction on corruption charges this month as proof democracy is maturing in the nuclear-armed Muslim-majority nation of 208 million by finally holding its venal political elite accountable.

Supporters of Sharif, whose party is now led by his younger brother, Shehbaz, argue his downfall was politically motivated and engineered by the army establishment, representing a blow to the "sanctity of the vote" that gave his Pakistan Muslim League-Nawaz (PML-N) a majority in the last elections.

The election comes as Pakistan's economy is in crisis, with the rupee's 20 per cent decline spiking inflation and dwindling foreign currency reserves likely to force the second International Monetary Fund bailout since 2013.

Recent nationwide polls indicate a tight race, with Khan's party ahead on 30 per cent in one survey, compared to 27 per cent for PML-N. Sharif's party tops another poll with 26 per cent compared to 25 per cent for Khan's Pakistan Tehreek-i-Insaf (PTI).

In third place was the Pakistan People's Party of Bilawal Bhutto Zardari, 29, the son of two-time Prime Minister Benazir Bhutto, who was assassinated in 2007. The PPP could emerge as a coalition kingmaker if no party wins a majority, as many expect.

Khan, however, is wary of governing with the established parties.

"If we have to make a coalition with either of the two main parties, then it means we can't bring about any major reforms," said Khan, who as captain led Pakistan to victory in the 1992 Cricket World Cup.

"So, I wonder if it is worth even forming a government if you have to make an alliance with one of those two parties."

The military, which has ruled Pakistan for nearly half of its 71-year history, denies any effort to influence the election.

The divisive campaign is likely to complicate any coalition negotiations after the vote, if they are necessary.

"I think you could have a complete collapse in terms of ability to form a government right after the election," said Moeed Yusuf, a Pakistani analyst at the United States Institute of Peace, a Washington think tank.

To gain a majority, a party needs 137 of the 272 elected National Assembly seats. A further 70 seats for women and minorities are awarded proportionally based on the voting percentages.

In 2013, the PML-N won 126 seats, while Khan's party came third with 28 seats. After the results, 27 winning independent candidates joined Sharif's party to give it a majority.

Khan has banked on gains in the PML-N stronghold of Punjab, Pakistan's most-populous province that has 141 elected seats, for his path to victory, successfully courting many so-called" electables" - entrenched local power brokers who often hold sway over about a quarter of Punjab's seats.

However, the PML-N could reap a sympathy vote after Nawaz Sharif returned to be arrested on July 13 along with his daughter Maryam, leaving his cancer-stricken wife in a London hospital. They deny wrongdoing.

Sharif released an audio recording from jail on Monday, urging supporters to send his party back to government for a second term.

"Even in this prison ... I can hear the chants of 'give respect to vote' from all directions," Sharif said. 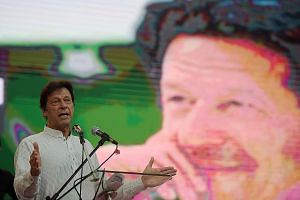 Ex-cricket star out to bowl over Pakistani voters

Mushahid Hussain Sayed, a PML-N senator, said the party had delivered on promises to reduce electricity shortages and improve infrastructure.

Those who voted for Sharif may also be annoyed that the three-times elected prime minister has been never been allowed to complete a term.

"It's two planks," Sayed said of the PML-N's appeal to voters. "Democracy and development."

Sharif, 68, was removed by presidential decree in 1993, in a military coup in 1999, and last year by the Supreme Court, which ordered his corruption trial.

The PML-N has taken hope in another opinion poll focusing on Punjab only - Sharif's party had a lead of 51 per cent to PTI's 30 per cent, according to the IPOR Consulting survey conducted from April 15 to June 2.

Respondents listed top two election issues as access to clean water and gas for cooking, each at 17 per cent. Inflation and corruption were ranked last, at 1 per cent each.