LAHORE (Reuters) - Pakistani helicopter gunships on Monday (April 18) pounded the island hideout of an armed gang that has been holding 24 hostages on a 10km long island in the centre of the Indus River, media and army sources said.

The operation involving more than 2,000 security forces has been ongoing for two weeks and the army's push to deploy troops, artillery and helicopter gunships is an unprecedented use of force by the military in Punjab, which is the political power base of Prime Minister Nawaz Sharif.

"We (army) had given the Chotu gang until 2 pm today to surrender but they did not abide by the deadline," said a military official based in the district of Rajanpur in southern Punjab where the battle is taking place. 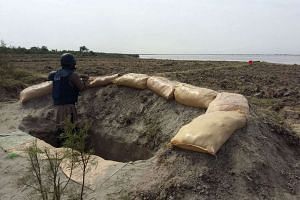 "Now there is no option left but a full-scale operation, which has started."

It was unclear just how many members of the Chotu gang, blamed for hundreds of cases of kidnapping for ransom, murder and robbery, were trapped on the island, but police said their families were believed to be accompanying them.

The army's publicity wing announced that General Ishfaq Nadeem Ahmed, the most senior commanding officer in the area, had arrived earlier in the day "to see preparation for impending operation against criminals".

While Pakistan's attention has for years been focused on the Taleban and Al-Qaeda threat on the Afghan border in the remote northwest, militants and criminals have quietly expanded their influence and won recruits in the country's heartland of Punjab.

At least six police officials have been killed in the battle for the island, launched in a sweeping crackdown after a Taleban suicide bombing killed 72 people in Lahore, the provincial capital, last month.

A police spokeswoman said policemen were among the 24 hostages.

The battle was taking place near Rajanpur, one of the poorest districts in Punjab, where the Panjnad River flows into the Indus, Pakistan's lifeline.

Previous military crackdowns have focused on the lawless tribal regions where the Taleban and other militants are based. Paramilitary Rangers also launched a crackdown on criminals in the violent southern port city of Karachi in 2013.