ISLAMABAD (REUTERS) - Pakistan said on Tuesday  (March 5) it had begun a crackdown on Islamist militant groups, detaining 44 members of banned organizations including close relatives of the leader of a group blamed for a deadly bombing in Indian-controlled Kashmir last month.

The interior ministry said it was a move to “speed up action against all proscribed organisations”.

Officials said it was part of a long-planned drive against militant groups, not a response to Indian anger over what New Delhi calls Islamabad’s failure to rein in militant groups operating on Pakistani soil.

Pakistan is facing pressure from global powers to act against groups carrying out attacks in India, including Jaish-e-Mohammed (JeM), which claimed responsibility for the Feb 14 attack that killed at least 40 paramilitary police.

The incident led to the most serious conflict in years between the nuclear-armed neighbours, with cross-border air strikes and a brief dogfight over the skies of Kashmir. Tensions cooled when Pakistan returned a downed Indian pilot on Friday.

In a further sign that tensions were easing, Pakistan’s foreign ministry said a delegation would visit New Delhi next week to discuss an accord on Sikh pilgrims visiting holy sites in Pakistan.

The interior ministry said close relatives of JeM leader Masood Azhar had been detained in “preventive custody” as part of the crackdown. It named them as Mufti Abdul Raoof and Hamad Azhar, who one ministry official said was the leader’s son.

On Tuesday, Pakistan placed two charities linked to Hafiz Saeed, founder of a militant organisation the United States and India have blamed for numerous deadly attacks, including a siege by gunmen in Mumbai in 2008 that killed 166 people, on the country’s official banned list.

The Jamaat-ud-Dawa and Falah-e-Insaniat Foundation charities were placed on the list after the government announced the restriction last month.

Some of the people detained were named by India in a dossier it gave to Pakistan after last month’s bombing, Interior secretary Azam Suleman said.

“We are investigating them and if we get more evidence, more proof against them, they will be proceeded against according to law and if we don’t get any proof their detention will end,”Suleman said.

A Security Council vote is due to be held in mid-March. However, Pakistan’s staunch ally China, a Security Council member, has blocked previous attempts by world powers to sanction the JeM chief.

The United States and Britain have urged Pakistan to deal with militant groups.

Many Pakistani groups and individuals are under UN sanctions, including the JeM, and Hafiz Saeed, the founder of the Lashkar-e-Taiba (LeT) militant group that carried out the 2008 attacks in the Indian city of Mumbai, in which 166 people were killed.

There was no immediate official reaction in India to the arrests in Pakistan.

However, an Indian government official, speaking on condition of anonymity, expressed scepticism. 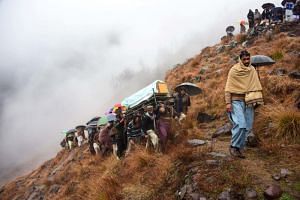 Pakistan reopens airspace over Lahore near border with India

“We have all seen this done for the last several decades now. How many times has Hafiz Saeed been arrested and let out?” the official said. “And have they taken action against Jaish camps?”

Saeed, who holds public gatherings in Pakistan, has been at the heart of criticism that Pakistan does not enforce its anti-militancy laws.

Pakistan has long used Islamist groups to pursue its aims in the region, but it has denied New Delhi’s accusations it actively supports militants fighting Indian forces in India’s part of Muslim-majority Kashmir.

From time to time – usually as a result of outside pressure - Pakistan has cracked down on anti-India militants but most factions manage to survive and resume activities.

Pakistan’s foreign ministry announced a new order on Monday to update existing laws that deal with those on UN sanctions lists. The government said it had developed a “full-fledged strategy” to deal with militants and it was looking to close “loopholes” that allowed banned groups to operate.

Two senior security officials told Reuters the government has drawn up plans to take over all madrasahs – Islamic schools - linked to groups banned by the United Nations and to seize their assets and infrastructure.

At a later stage the government may consider recruiting some of the militants into paramilitary forces or seek other ways to find them jobs and incorporate them into normal society, the officials said.

Closing madrasahs is a thorny issue in Pakistan, a deeply conservative Muslim nation where religious schools are often blamed for radicalisation of youngsters but are the only education available to millions of poor children.

A Pakistani minister told Reuters that several madrasas had been closed in recent days, including one run by Saeed-linked Islamic charity Jamaat-ud-Dawa (JuD) and another seminary operated by JeM in Bahawalpur, where JeM has its headquarters.

Several other madrasahs will be closed but there will not be widespread closures, said the minister, who asked not to be identified, adding that only a few such schools have links with terrorism.

Saeed-linked Jamaat-ud-Dawa (JuD) is estimated to run about 300 madrasahs.

Pakistani TV anchor and columnist Nazim Zehra, who attended a background briefing by Prime Minister Imran Khan and finance minister Asad Umar on Monday, said the government was determined that militants should put down their weapons and be demobilised.