ISLAMABAD/NEW DELHI (DPA, DAWN/ASIA NEWS NETWORK) - Officials from Pakistan and India met on Thursday (March 14) in the first diplomatic contact between the two countries since a suicide bombing in the disputed region of Kashmir last month triggered an escalation in tensions between them.

Talks focusing on the opening of a corridor and a new border crossing to allow Indian Sikhs to visit a shrine in Pakistan were held at the border post at Attari, India's Ministry of External Affairs spokesman Raveesh Kumar said.

The discussions were detailed and constructive and held in a cordial environment, a joint statement from the two sides said.

The Kartarpur Sahib shrine in the eastern Pakistani province of Punjab is one of the holiest in Sikhism.

The founder of the religion, Guru Nanak, spent the last 18 years of his life and died at Kartarpur Sahib.

Sikhs live in both countries and often face difficulties in visiting holy shrines due to tensions between Pakistan and India.

Last month's bombing almost triggered a war between the two nuclear-armed rivals before tensions were defused with the help of international intervention. 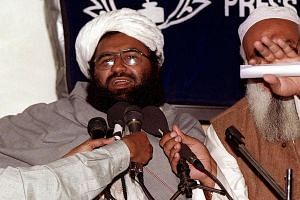 The meeting on Thursday included discussions between technical experts from India and Pakistan on details for the proposed corridor, their statement said.

The technical experts will meet on Tuesday (March 19) at the two proposed ends of the corridor to finalise details. This will be followed by a meeting of the full delegations again on April 2.

Both sides agreed to have the Kartarpur Sahib Corridor operational as soon as possible, the statement said.