MUMBAI (REUTERS) - Christian voters in the Indian city of Mumbai have demanded more burial grounds ahead of national elections next month, claiming they are being forced to pile bodies on top of each other due to overcrowding in cemeteries.

India will hold a general election from April 11 and campaigning is now in full swing, with job security, hardship among rural communities and tackling terrorism the key talking points so far.

Christians total 2.3 per cent of India's 1.3 billion population, and an estimated 900,000 of the community live in the country's financial capital Mumbai and its satellite cities, according to Christian associations.

Mumbai Christians want to get their voices heard and add burial grounds to the list of election topics.

"We are going to meet the candidates and make a strong pitch for burial grounds," Mr Kasber Augustine, a member of the Bombay Catholic Sabha, told the Thomson Reuters Foundation.

The community's members met at the weekend to discuss the problem and on Tuesday launched the #NoCemeteryNoVote hashtag to help publicise their demands.

"The community has no option but to bury one body over the other. We do shroud burials now to save space," Mr Augustine said. 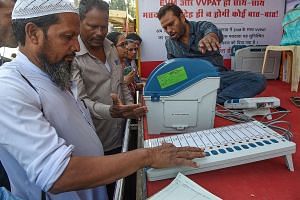 There are six public cemeteries in Mumbai and three in its neighbouring district of Thane, considered a Mumbai suburb.

To make effective use of space, the community uses shrouds instead of wood coffins and digs out the remains after about two years once the body is decomposed.

The remains are deposited into miniature vaults, but their numbers are also running low.

Community members said that bodies are rarely decomposed when another comes for burial, leading to an unpleasant experience for family members who see the remains of their loved ones juggled to make space.

With a population of about 18 million, overcrowding is an everyday affair in Mumbai - from packed trains, traffic congestion and cramped housing.

In death, people should get peace and space, said Christian community's members, adding that previous promises made by authorities to provide more cemetery space had not been kept.

Parliamentarian Rajan Vichare of regional party Shiv Sena, which controls the civic bodies of Mumbai and Thane, said work on a new burial ground in Thane was nearing completion.

"Nothing happens overnight. It will be ready in another six months. I will be mentioning this during my election speeches,"said Mr Vichare, who will be contesting the elections this year.