NEW DELHI - The unprecedented federal fiat to strip away Jammu and Kashmir's special status has sent a worrying signal to a clutch of eastern Indian states who enjoy similar rights.

Having witnessed the decades-old Article 370 of the Indian Constitution being repudiated overnight in Parliament through a presidential order, these states now fear their special rights could also be snatched away.

There are 11 other states, including many from the far eastern flank of the country such as Mizoram, Nagaland and Sikkim, that enjoy special provisions to protect their indigenous identity under various sections of Article 371 in the Indian Constitution. They are allowed to formulate and practise their unique set of laws governing issues such as religious or social practices, administration of civil and criminal justice and even ownership and transfer of land.

In Mizoram state, such a guarantee forms the cornerstone of the Memorandum of Settlement that the Indian government signed with the Mizo National Front (MNF) in June 1986. Popularly known as the Mizo Accord, it incorporated the domains listed above and specified that no act of Parliament pertaining to them will apply to the state, unless its legislative assembly decides to adopt it.

It is on the basis of this agreement that the MNF ceased its long campaign of violence launched in 1966 to establish an independent homeland for Mizos.

Not only are these guarantees part of a political settlement with certain secessionist forces, but they also embody a spirit of flexible federalism that many believe has come under threat with the Bharatiya Janata Party's (BJP) push for a stronger central government, a fear that has been exacerbated by its strong majority in Parliament.

Many of the rights enjoyed by Mizoram, a Christian-majority state, are similar to that in Jammu and Kashmir, India's only Muslim-majority state that will now be bifurcated into two union territories. This includes a prohibition on sale of land or property to outsiders.

"If Article 370 can be taken away from J&K, so can Article 371G from Mizoram," Mr Lallianchhunga, an assistant professor of political science at Mizoram University, told The Straits Times. 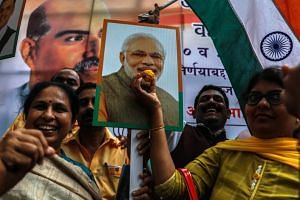 Kashmiris worry about an uncertain future

"The BJP has an idea of a Hindu rashtra (state), of one India that is governed by one rule. In order to realise this dream, they want to make the central government a very strong unitary one and undo the spirit of cooperative federalism," said Mr Lallianchhunga, also a spokesman for the Congress in Mizoram.

It is a fear that has echoed also across Sikkim, where opposition parties have demanded a reassurance from the government that it will not tinker with Article 371F that pertains to their state.

There is similar widespread concern in Nagaland, where governor R N Ravi has already issued a statement to reassure the Nagas that Article 371A, which applies to their state, is a "sacred commitment". Naga nationalist groups are currently in talks with the federal government for autonomy greater than what is offered under Article 371A.

Minister of Home Affairs Amit Shah has dismissed opposition concerns around any potential dilution or scrapping of Article 371 as an attempt to "mislead" people. "Why will we remove it? It doesn't come in the way of country's unity and integrity... I reassure all states of the north-east that the Narendra Modi government has no intention to scrap 371," he told the Parliament.

But this has failed to dispel concerns from Monday's unilateral and almost clandestine move to undo Article 370. Mr Lallianchhunga brings up the ongoing attempt by the BJP government to legislate the Citizenship Amendment Bill, which proposes to offer citizenship to non-Muslim minorities from neighbouring countries, as an example of its disregard for indigenous interests in the north-eastern states.

"If legislated, this will lead to the naturalisation and settlement of outsiders from Bangladesh currently in Mizoram, undoing the restriction it currently has on entry of outsiders," he added.