The Indian government has ordered stepped-up security for all of Kashmir amid calls for a military response to an attack by militants on an Indian Army base near the de facto border with Pakistan.

India has blamed its nuclear- armed neighbour for the commando-style attack by four heavily armed militants on the base in Uri on Sunday. One of the deadliest such incidents in recent years, it left 18 soldiers dead and several injured.

The army said an initial assessment revealed that the militants who were killed in the gun battle were from the Jaish-e-Mohammed, a Pakistan-based terror group. Pakistan has denied it had anything to do with Sunday's attack.

Indian Prime Minister Narendra Modi, who vowed that the attack would not go unpunished, yesterday chaired meetings to decide on a response amid shrill calls for retaliation from within his own Bharatiya Janata Party (BJP) and the government.

"A befitting reply will be given. We know Pakistan is behind it," Minister of State for Defence Subhash Bhamre said on Indian television yesterday.

On Sunday, Home Minister Rajnath Singh denounced Pakistan as a "terrorist state", while BJP leader Ram Madhav said the "days of so-called strategic restraint are over" and called for a "complete jaw for one tooth". 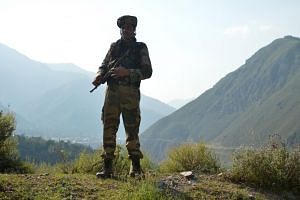 Tempers were also running high on social media in India, with some calling for surgical cross-border strikes even at the cost of further escalating tensions and inviting a Pakistani response.

"We have to take the risk. Enough is enough," said retired brigadier Gurmeet Kanwal, a senior fellow at the Institute for Defence Studies and Analyses.

India and Pakistan have been locked in a dispute over Kashmir since they secured independence from Britain in 1947. They have gone to war thrice in the past over the Himalayan region.

Ties between the two have been tense in recent times, with efforts to kick-start a stalled peace dialogue ending in January this year following a terror attack on an Indian Air Force base in Pathankot.

India has since continued to accuse Pakistan of doing little to stop cross-border terrorism, a charge Islamabad has dismissed.

Analysts noted that Mr Modi, who promised to end cross-border terrorism, was under pressure to set himself apart from the previous government but had very limited options.

As the government considered its options, the Indian Army ruled out any knee-jerk response while stressing that it had the "desired capability" to respond.

"We reserve the right to respond to any act of the adversary at a time and place of our choosing," said Lieutenant-General Ranbir Singh.

The attack in Uri coincides with unrest in Kashmir following the killing of Kashmiri militant Burhan Muzaffar Wani. Protests have continued since July, when around 85 people were killed in clashes with security forces.

Pakistan has said it would bring up the developments in Kashmir at the United Nations General Assembly, which began yesterday in New York, as part of its diplomatic efforts to internationalise the dispute.

Many countries, including the United States, Britain and Bangladesh, as well as UN Secretary-General Ban Ki Moon, have condemned the attack.