NEW DELHI (BLOOMBERG) - Prime Minister Narendra Modi will make his first-ever visit to the Maldives for the swearing-in of its new president, signalling a shift in the island nation towards India and away from China.

The Saturday (Nov 17) visit - the first by an Indian head of government since 2011 - is expected to reset strained ties with the Maldives as Mr Ibrahim Mohamed Solih, a veteran opposition politician, takes over after successfully ousting former pro-China president Abdulla Yameen.

Mr Solih's new government is expected to end political uncertainty in the South Asian archipelago nation that preceded a tense election this September.

The former president received international condemnation for locking up opposition figures and judges, including unusually strident comments from India.

The previous administration had also taken numerous loans from China that pushed the country into debt, similar to other countries in the region including Sri Lanka and Pakistan.

Mr Solih's party has criticised China's activities in the country, and is expected to review major projects.

"India is in a position to gain some lost ground in Maldives," said Mr K. Yhome, who specialises in India's neighbourhood at the New Delhi-based Observer Research Foundation. 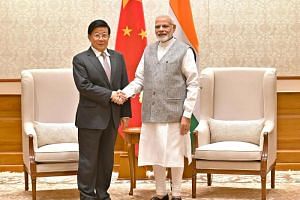 "The fact that Prime Minister Modi has agreed to attend the swearing-in sends a message that India supports the new government."

Still, he said, "it remains to be seen how Solih continues his posturing" after elections.

Mr Solih's triumph in the Maldives contrasts with political turmoil in Sri Lanka, where the President last month tried to fire his prime minister and appoint the country's former pro-China strongman leader Mahinda Rajapaksa in his place.

That move, which has been challenged by the opposition, has attracted international criticism.

Mr Modi's trip comes amid a broader push by the US, India, Japan and Australia - known informally as the Quad - to counter China's infrastructure lending in the region.

After a meeting between the countries in Singapore, the US released a statement expressing support for the new Maldivian government and an outcome in Sri Lanka "consistent with democratic principles".