Banner front-page headlines such as "Love at first right", "Rainbow nation" and "Independence day" greeted the verdict of the top court to strike down the heart of Section 377, a law introduced by the British rulers in 1861.

Many said the five justices may have opened the door to demands for greater civil rights for long-marginalised gays and lesbians, including same-sex marriage.

The conservative Hindu newspaper called the verdict "a reaffirmation of the right to love" and "a welcome departure from centuries of 'hetero-normative' thinking".

The judges had "furthered the frontiers of personal freedom and liberated the idea of personal rights from the pressure of public opinion," it added in an editorial.

The Hindustan Times warned that the lesbian, gay, bisexual and transgender community will still face condemnation from their families and colleagues.

"Harassment and violence will continue to occur," it warned.

"But if the long legal battle and the courage of queer people and communities are anything to go by, this fight for equal rights will not end. It will grow even stronger now that even the apex court has said there is no going back."

Amid pictures of celebrating activists, Google India put out a rainbow flag on its homepage and Facebook changed its display picture to a multi-hued icon. The United Nations and rights activists around the world gave Twitter support to the Supreme Court ruling. But Mr Modi's right-wing government has yet to make a comment on the ruling.

Mr Modi's administration had initially opposed dismantling Section 377, though in July, government lawyers said they would give in to the "wisdom" of the top court.

Justice D.Y. Chandrachud said the government should have taken a categorical stand one way or the other instead of being ambivalent, the Hindu newspaper reported the judge as saying.

The Indian Express daily said the ruling Bharatiya Janata Party's (BJP) silence on the issue was "deafening" and "deceptive". 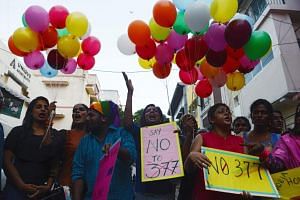 India's main opposition Congress and other small regional parties have welcomed the verdict.

The BJP's ideological Hindu nationalist backer, the Rashtriya Swayamsevak Sangh (RSS), said it does not consider homosexuality a crime, but it did not support same-sex relations.

"Traditionally, Indian society does not accept such relations," it said in a statement.