NEW DELHI - A row between Andhra Pradesh chief minister, Chandrababu Naidu, and prime minister Narendra Modi's ruling Bharatiya Janata Party over the status and funding for the building of a new state capital and other projects has come to a head.

Mr Naidu has pulled out two ministers from the federal government and threatened to quit the alliance with the BJP, moves seen as more of a political statement by the chief minister ahead of state elections next year.

Civil Aviation Minister Ashok Gajapathi Raju and Minister of State for Science and Technology YS Chowdary resigned from the federal cabinet on Thursday (March 8). Two BJP ministers who were part of the Andhra Pradesh cabinet also quit on Thursday.

Mr Naidu, who is building the capital city of Amaravati from scratch with help from Singapore, has been seeking special status, including tax breaks and special funds from the federal government, for Andhra Pradesh.

Special status was promised by the previous Congress-led government when India's newest state of Telangana was carved out of Andhra Pradesh in 2014.

At the time, it was decided that the two states would share Hyderabad, the country's IT capital, for a decade, giving Andhra Pradesh enough time to build its new capital and special status to cover any loss of revenue.

"It's a crucial time... We have to stand, we have to fight, we have to get it done," tweeted Mr Naidu, who is the leader of the Telugu Desam Party. 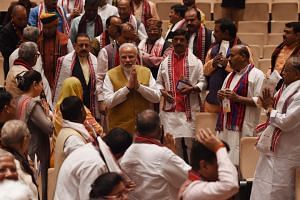 At a press conference late on Wednesday, he told reporters that he had gone to Delhi 29 times to discuss the issue but had returned empty handed each time.

Mr Naidu's decision will not destablise the BJP, which enjoys a solid majority in the Lok Sabha or lower house of parliament. The party, in fact, has been growing politically stronger with successive wins in recent state elections in Tripura, Nagaland and Meghalaya.

Finance minister Arun Jaitley said on Wednesday that it was not constitutionally possible to give special status to Andhra Pradesh, adding however that the government was willing to provide a matching economic package.

At least one analyst described Mr Naidu's decision as "inevitable" because of public sentiment in Andhra Pradesh.

"Andhra people were promised special status as compensation for bifurcation and losing Hyderabad. Andhra Pradesh may not be backward but it was a promise," said Hyderabad based political analyst, K. Nageshwar.

"He has to politically convince people that he had tied up with BJP for the sake of Andhra Pradesh."

Singapore has been involved in the project since 2014 with Surbana Jurong submitting the city's masterplan in 2015.

Last year it was announced that a consortium of Ascendas-Singbridge and Sembcorp Development would be the master developers for the commercial core of the new capital spread over 6.84 square kilometres.

Mr Naidu, who has so far received Rs25 billion ($505.28m) of federal funds, had expressed disappointment that Amaravati was not given an allocation in the latest federal budget.

"The (federal) funds flow for the new capital city and Polavaram project are meagre," he told reporters on Wednesday. Polavaram is a multi-purpose irrigation project in Andhra Pradesh.

Analysts noted that Amaravati, a showpiece project estimated to cost upward of Rs1 trillion, was already running behind schedule.

"There are only temporary buildings in Amaravati. The concept is there but he (Mr Naidu) needs to show progress by the time he goes to the polls in 2019," said Dr N Bhaskara Rao of the Delhi-based Centre for Media Studies.

"That may be difficult now."