ALLAHABAD, INDIA (AFP) - The largest gathering of humanity on the planet began Tuesday (Jan 15), with tens of millions showered in rose petals and holy ash at a spectacular Hindu festival on India’s sacred riverbanks.

The Kumbh Mela is expected to attract more than 100 million pilgrims to Allahabad over the next seven weeks to bathe in waters considered among the holiest in Hinduism.

Allahabad rises alongside the Ganges, Yamuna and mythical Saraswati, and the banks of these hallowed rivers have transformed into a riot of colour for the centuries-old festival.

A gigantic tent city has emerged near the confluence of the rivers, where Hindus believe bathing during the Kumbh helps cleanse sins and brings salvation.

Before dawn thousands of naked holy men smeared in ash, some on horseback, proceeded toward the rivers’ meeting point known as “Sangam”.  The “naga sadhus” plunged into the chilly waters before the sun rose, as nearby devotees chanted praises to the Hindu deity Shiva.

“This is the purpose of my life,” said Mr Sadhu Sridhar, reapplying a grey ash to his body after emerging from the waters.

Throughout the day, millions of pilgrims will queue in huge processions for their chance to plunge into the waters in northern Uttar Pradesh state.

“I do not know whether my prayers were accepted, but I am satisfied after taking a dip,” said Mr Narendranath Chakraborty, a 72-year-old who travelled from Kolkata in India’s east.

Thirty million devotees – more than the entire population of Australia – are said to have bathed on a single auspicious day.

A helicopter dropped rose petals Tuesday on an endless sea of dreadlocked sadhus smoking marijuana, priests offering blessings in saffron robes and pilgrims from every corner of India.

“All the Gods descend on this sacred place during this period. This is the most auspicious event for any human being,” said Mr Chandhans Pandey, a 60-year-old devotee.  “I have been planning to attend (for) many years.”

Nearly 30,000 police have been deployed to oversee crowds for the huge undertaking, and prevent stampedes that have marred previous gatherings.

Patrol drones buzzed over a 45 sq km encampment set aside specially for pilgrims – a temporary city three-quarters the size of Manhattan.

Restaurants, roads and marketplaces have sprung up to cater to the huge influx of visitors, along with 122,000 toilets and 300km of road. 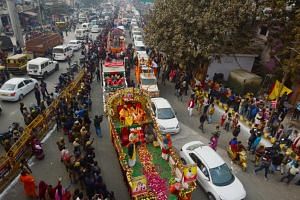 Festival veteran Ganeshanand Bharamachari, from nearby Varanasi, said the Kumbh had grown in popularity in recent years.

“People, mostly from cities, are becoming increasingly religious because the western life they were living has not led them anywhere,” the 78-year-old told AFP.

The Uttar Pradesh state government, led by a firebrand Hindu priest, has heavily promoted this year’s festival, which comes as India prepares for a general election due by May.

Prime Minister Narendra Modi, whose Hindu nationalist Bharatiya Janata Party is in power in Uttar Pradesh, visited Allahabad in December to inaugurate a high-tech command centre to manage the Kumbh.

The historic city was even renamed Prayagraj in October by the state’s conservative government, stripping its centuries-old name and replacing it with an ancient Hindu title.

But it is still widely known as Allahabad, the name given by Islamic rulers that reigned over India hundreds of years ago.

According to Hindu mythology, gods and demons fought a war over a sacred pitcher, or kumbh, containing the nectar of immortality.

During the tussle, a few drops fell to earth at four different locations – one being Allahabad.  The Kumbh, which runs until March 4, was recognised as an intangible cultural heritage by Unesco in 2017.