As millions in India queued up at polling booths on April 11 to vote in the ongoing parliamentary elections, government officials sat waiting at the country's southernmost voting centre in the Andaman and Nicobar Islands.

They spent the day hoping at least one of the Shompens, an indigenous community on the archipelago, would show up and keep their tryst with Indian democracy. None did.

It was a letdown for an administration otherwise proud to showcase its efforts in bringing democracy to marginalised voters in remote areas.

Officials had left no stone unturned to lure the Shompens out to vote. Outreach to explain the merits of democracy, as well the intricacies of using electronic voting machines, had begun early in February.

Workshops, facilitated by a translator, were held near their habitat, which remains inaccessible because of dense forests.

An improvised calendar made of ropes, with each knot in them representing a day, was also handed out to the community so that they could count down to polling day. Even the booth at Lawful Bay on the Great Nicobar island was decorated to mimic the Shompens' culture. Resting places were provided nearby.

This is the time the Shompens wander in the forests to collect the pandanus fruits ahead of the forthcoming rainy season. This is probably why they didn't come and vote.

MR PREM SINGH MEENA, the assistant commissioner posted in Campbell Bay. He and his team were charged with recording the community's votes.

But the Shompens decided they had more consequential things in their lives to attend to than India's festival of democracy.

"This is the time the Shompens wander in the forests to collect the pandanus fruits ahead of the forthcoming rainy season. This is probably why they didn't come and vote," says Mr Prem Singh Meena, the assistant commissioner posted to Campbell Bay. He and his team were charged with recording the community's votes.

Some of the Shompens, who number fewer than 300, had voted for the first time in the 2014 parliamentary polls.

The reclusive community has little contact with the administration, except in cases of medical intervention and food handouts, which they have come to depend on following the December 2004 tsunami.

The archipelago's other indigenous communities also have had chequered encounters with India's democracy.

While the Sentinelese and Jarawas have never voted - nor has the administration solicited their votes - others like the Onges, Great Andamanese and Nicobarese have cast their ballots, including for the current elections.

However, romanticised reporting of the "no voter left behind" narrative overlooks a fundamental question: How has the introduction of democracy improved the lot of these remote voters? Not much, in the case of the communities of the Andaman and Nicobar Islands, which account for one seat in India's Parliament.

Many experts have long advocated that efforts at coaxing these communities into the mainstream have yielded more harm than good.

Reduced from a position of strength in their traditional hunter-gatherer lifestyle, the Great Andamanese today have been stripped of their self-sufficiency and identity.

"Jobs have been given to them in the name of assimilation, but since they do not entirely belong to the money economy, they do not know what to do with the money. They are all alcoholics and almost everyone is suffering from liver diseases," says Professor Anvita Abbi, a linguist who has worked on the Great Andamanese languages.

Mr Denis Giles, the editor of the Andaman Chronicle daily, says the Nicobarese - who amount to more than 27,000 and voted in large numbers - are aware of their rights as Indian citizens. 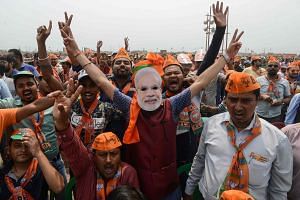 "They have been voting since the beginning and have lawyers, doctors and engineers, as well as teachers, from their community," he says.

But this is not the case with the Onges and Great Andamanese.

"As far as they are concerned, I do not see any direct benefits of voting. Most of them are hardly aware of the Indian Constitution and unless the tribes understand the concept of India as a nation, I don't think it is of any use," he tells The Sunday Times.

In the 2014 parliamentary polls, proposals deemed a threat to the Jarawas, such as removing a protective buffer zone around their reserve and furthering road connectivity through it, were made by political candidates. A current government proposal to promote investment, particularly in the tourism sector, has also drawn criticism for posing a risk to the islands' communities and natural heritage.

"Getting the Shompens to come and vote is just a show intended to earn laurels," says Mr Sanjay Meshack, who contested the parliamentary polls for the islands as a representative of the Aam Aadmi Party.

"No one cares about key issues such as the lack of transparency on how funds allotted for tribal development are being used," he adds.

A version of this article appeared in the print edition of The Sunday Times on April 21, 2019, with the headline 'Island tribes snub India's efforts to get them to vote'. Subscribe
Topics:
More
Whatsapp Linkedin FB Messenger Telegram Reddit WeChat Pinterest Print Purchase Article Copy permalink