NEW DELHI (REUTERS) - India's main opposition Congress party will simplify the goods and services tax (GST) and take "rational economic decisions" to attract foreign investment if voted back to power in a general election due by May, its leader Rahul Gandhi has said.

Launched in 2017, the GST was initially hailed as Prime Minister Narendra Modi's biggest economic reform, as it replaced more than a dozen federal and state levies and unified Asia's third largest economy.

But its chaotic implementation and complexities - months after a shock ban by Mr Modi on high value bank currency aimed at unearthing untaxed wealth - badly hurt small businesses and led to millions of job losses in the cash-driven economy, presenting the biggest challenge to Mr Modi's re-election chances.

Mr Gandhi, scion of India's Nehru-Gandhi dynasty, said during a visit to Dubai that foreign investment was at a multi-year low in India due to the "ill-advised and badly thought out economic moves" such as the currency ban and a "poorly designed GST".

"We will take some rational economic decisions," he told a press conference on Saturday (Jan 12), which was broadcast live on Twitter.

"We will restructure the GST and we will embrace investments from the Middle East and other parts of the world. We are the party of (India's economic) liberalisation, we are the party that gave the fastest economic growth in the first decade of the century, and will do that again."

Mr Gandhi said his main priority would be to create jobs, simplify the GST, rebuild confidence in institutions such as the Reserve Bank of India - whose governor resigned recently after a fight over autonomy with the government, and the Supreme Court. 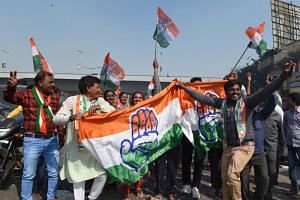 Rahul the politician comes of age: The Statesman columnist

Speaking Of Asia: India - a gathering sense of deja vu

Four Supreme Court judges held a rare press conference early last year saying that "unless this institution is preserved and it maintains its equanimity, democracy will not survive in this country".

Mr Modi told a convention of the Bharatiya Janata Party (BJP) in New Delhi on Saturday that for Congress, "every institution was wrong and only they were right".

The Congress press conference was organised by the Indian Overseas Congress, which is present in about 35 countries, as Mr Gandhi tries to reach out to rich Indians living abroad for funds and social media support for the party that has dominated the country's politics for decades before being nearly decimated in the last general election in 2014 by Mr Modi.

But back home, Mr Gandhi received a jolt when bitter rivals Bahujan Samaj Party (BSP) and the Samajwadi Party (SP) announced an election tie-up without Congress in Uttar Pradesh state, which sends the highest number of lawmakers to the lower house of parliament.

"The BSP and SP have made a political decision," Mr Gandhi said. "It's on us on how to strengthen the Congress party in Uttar Pradesh and we will fight with our full capacity. Whether we do or their alliance does, the BJP is not winning there."

Mr Modi said at the Delhi convention that the opposition was working on a "desperate alliance", while the BJP would give a"strong government".

The Hindu nationalist BJP lost power in three key states recently, forcing the government to announce a flurry of measures to woo small businesses and the less well-off since then.