However, Ms Parmal, who comes from a poor family in the western Indian state of Gujarat, is wondering what will happen to the second surrogate child she is carrying, with the government moving ahead to ban commercial surrogacy.

On Aug 5, the Lower House of Parliament passed the Surrogacy (Regulation) Bill to ban commercial surrogacy, allowing only altruistic surrogacy and, even then, by only a blood relation. It now needs to be passed by the Upper House.

Ms Parmal, who is four months pregnant and earns 400,000 rupees (S$7,800) as a surrogate, said: "We are labourers earning 120 rupees per day. I could have never thought of buying a house or putting my children in private school.

"I had problems in the house, that's why I came to do this. Nobody forced me, it's my circumstances... I don't know what will happen now."

According to the draft Bill, only a couple married for at least five years and certified as infertile by a government-appointed medical board will be eligible to have a child through surrogacy. The couple can pay the medical and care bills for the surrogate mother, but nothing more.

Single men and women, and lesbian, gay, bisexual and transgender couples will not be eligible for surrogacy, according to the draft Bill.

It also proposes stringent penalties, including a jail term of up to 10 years and fines of up to 1 million rupees, for violators in an industry estimated to be worth US$2 billion (S$2.8 billion).

This is the government's second attempt to pass this legislation following a failed bid in 2016. But this time, Prime Minister Narendra Modi's Bharatiya Janata Party has a majority in the Lower House and has managed to cobble together a majority in the Upper House.

India has been a hub for surrogacy services due to its low medical costs. Over the years, the government has moved to tighten regulation on the back of incidents of unethical practices, exploitation of surrogate mothers - usually poor women who are unaware of their medical rights - and abandonment of children born out of surrogacy. In 2015, it banned surrogacy for foreigners.

Critics, including fertility doctors, have called the legislation excessive and discriminatory, even as those who oppose surrogacy maintain it is ethically wrong to exploit poor women.

The surrogacy industry is already in panic mode.

Since the draft Bill was introduced last month, doctors have been getting more inquiries from couples who now want to start the process before the legislation kicks in. 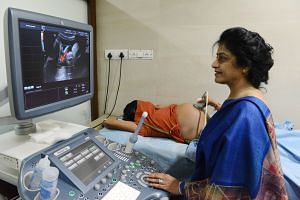 The push and pull of commercial surrogacy

At the Akanksha Hospital and Research Institute in Anand, Gujarat, Dr Nayana Patel said inquiries for surrogacy have risen by 40 per cent amid uncertainty among couples and surrogates. "There is a big jump (in inquiries) because people want to start the process before the ban kicks in. Celebrities and those who have money can go abroad. The worst-affected will be middle-class couples," said Dr Patel, whose clinic performs 20 to 25 surrogacy procedures a month.

Many believe a ban would be difficult to enforce in an industry that includes a network of middlemen who source women from different parts of the country and bring them to medical clinics that match them up with parents.

According to government estimates, there are 2,000 clinics offering surrogacy services.

Mr Gaurav Wankhede, founder and director of the Become Parents surrogacy agency, which he has moved out of India, said: "Indians would be looking at countries such as Ukraine, Kenya and, perhaps, Georgia. People who are rich and famous would go to the US... Those who can will go out of country and there is no way you can stop it."