In the commentary, the writer says that unless India-Pakistan ties improve, focus will be placed on the BIMSTEC instead of SAARC.

KATHMANDU (THE KATHMANDU POST/ASIA NEWS NETWORK) - The Indian government's decision to invite Bay of Bengal Initiative for Multi-Sectoral Technical and Economic Cooperation (BIMSTEC) leaders for Thursday's swearing-in ceremony of Narendra Modi, who is starting his second term as prime minister, has sparked a debate over the future of the South Asian Association for Regional Cooperation (SAARC), of which Nepal is a founding member and the current chair.

India's decision to invite leaders from BIMSTEC is in line with the manifesto of Modi's Bharatiya Janata Party, which was unveiled days ahead of the elections in April, as it explicitly states that the party will expedite the BIMSTEC process.

The manifesto had dropped the mention of SAARC.

This is a departure from the last event five years ago when Modi had invited SAARC leaders to his swearing-in ceremony.

Indian foreign policy analysts and media have painted a bleak picture of SAARC under Modi, saying that the regional bloc is unlikely to take off now.

"Pakistan's obstructionism within SAARC translated into blocking initiatives on transit with Afghanistan, a South Asian satellite, and a motor vehicle agreement, which forced India to pursue regional integration through other initiatives, including bilaterally, BBIN (Bangladesh, Bhutan, India and Nepal) and BIMSTEC."

When Modi invited SAARC leaders in 2014, there was optimism that the regional project would move expeditiously. 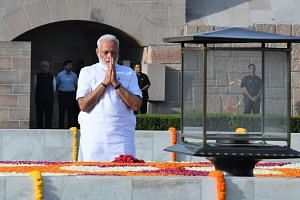 The same year, Modi visited Nepal, for a second time, to participate in the 18th SAARC summit.

Pakistan had expressed some reservations about Modi's proposal of SAARC satellite and SAARC Motor Vehicle Agreement.

Two years later, India decided to pull out of the 19th SAARC summit scheduled to be held in November 2016 in Islamabad, blaming Pakistan for a militant attack on the Indian forces in Kashmir.

Pakistan had denied the charges. But the 19th summit was subsequently postponed.

In the months leading up to the Indian elections, another militant attack in Kashmir killed at least 40 Indian soldiers, prompting New Delhi to launch airstrikes in the Pakistani territory.

Since then, relations between India and Pakistan, the two nuclear-armed neighbours, have remained sour.

"It is clear that SAARC will remain stagnant until Modi is ready to invest political capital in normalising relations with Pakistan," Xavier told the Post.

SAARC, since its inception in 1985, has been pulled back by India-Pakistan rivalry.

The secretariat of the regional grouping is based in Kathmandu, and as the current chair, Nepal, has been pushing hard to resume the stalled process.

Even though India has snubbed SAARC, Prime Minister KP Sharma Oli is travelling to New Delhi to attend Modi's oath-taking ceremony, as Nepal has been a member of BIMSTEC since February 2004. Nepal hosted the fourth summit of the grouping last year.

According to officials, Oli will raise the issue of revitalising the regional process while in New Delhi.

"Pressure from other countries like Nepal is rising on India to recommit to SAARC but this is unlikely to change Delhi's position," said Xavier. "In this sense, India's SAARC policy is dependent on its broader Pakistan policy."

The Hindustan Times reported on Tuesday, quoting people familiar with developments, that the decision to shift focus from SAARC to BIMSTEC was made because it was felt this was a more active grouping with greater potential.

The newspaper added: BIMSTEC also has a better fit with several key foreign policy initiatives of the National Democratic Alliance (a coalition of BJP and its allies) government--the "neighbourhood first" policy, the Act East policy focused on India's extended neighbourhood and the Indo-Pacific policy.

Inviting the leaders of BIMSTEC to the inauguration also took care of another tricky issue confronting the National Democratic Alliance(NDA)-how to maintain the focus on India's neighbourhood without having to extend an invitation to Pakistan, given the rocky state of bilateral relations, said the paper.

Pakistan, however, has downplayed India's decision to invite leaders from SAARC members.

Pakistani Foreign Minister Shah Mehmood Qureshi told a news channel that "his (Modi's)entire focus (during the election campaign) was on Pakistan-bashing. It was unwise to expect that he can get rid of this narrative (soon)."

A geopolitical storm in the Indian Ocean

Khadga KC, a professor of international relations at Tribhuvan University, said the invitation for BIMSTEC leaders is part of New Delhi's strategy to expand its "sphere of influence".

"So this time he (Modi)has reached out beyond the SAARC region," KC told the Post.

"I do not see this move in a negative way since Modi has shifted (his) focus from SAARC to BIMSTEC due to his legitimate victory," said KC. "It is an attempt to expand his clout as well. To woo Muslim voters back home, he is making the Maldives his first port of call," said KC.

Even though the SAARC summit has been postponed indefinitely and political meetings and dialogue among the member states have been suspended for long, other meetings at technical and bureaucratic levels are taking place regularly, officials at the SAARC Secretariat told the Post.

Nonetheless, there is little likelihood of the SAARC project-the eight member states have put billions of rupees into the secretariat, regional centres and projects under the Development Fund-moving forward until India and Pakistan patch up.

There have also been attempts to hold the 19th Saarc Summit in Sri Lanka if the India- Pakistan standoff continues, in a bid to save the regional process.

But there has been no concrete headway so far, multiple officials familiar with the negotiations told the Post.