MUMBAI (REUTERS) - Jet Airways (India) Ltd will be unable to fly beyond 60 days unless cost-cutting measures including pay cuts are put in place, and it has approached investment bankers again to help sell a stake in the carrier, local media reports said on Friday (Aug 3).

The management team, including Chairman Naresh Goyal, has informed employees in face-to-face meetings in recent days in Mumbai and Delhi that the airline's financials are in a bad shape and drastic measures needed to be taken to cut costs, the Economic Times daily reported, citing two company executives.

Jet Airways was not immediately available for comment when contacted by Reuters.

Shares of the company fell more than 5 perc ent in early trade in Mumbai.

"In line with its stated focus of creating a healthier and a more resilient business, Jet Airways has been implementing several measures to help it reduce cost as well as realise higher revenues, for desired business efficiencies," the company said in response to Economic Times without specifically mentioning the 60-day deadline given to employees.

Separately, newspaper Mint reported that Jet Airways has approached investment bankers again to help sell a stake in the carrier, citing two people with direct knowledge of the matter.

The airline is facing several challenges including a surge in fuel prices, weaker rupee and intensifying competition. 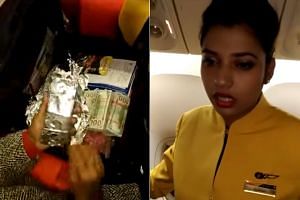 Jet Airways stewardess nabbed for smuggling US$500,000 in cash out of India

"Jet Airways is looking to raise immediate cash and the transaction may include Jet Airways founder Naresh Goyal offloading a part of the promoter's stake in the company," one of the sources told Mint on condition of anonymity.

Earlier in the week several media reported that Jet Airways had asked its employees to take a pay cut of up to 25 percent due to rising costs.