But recent U-turns by state governments on massive infrastructure projects have added to the climate of economic uncertainty in a country where growth has slowed.

The new government of Maharashtra is reviewing a multibillion dollar bullet train project, which India is developing in collaboration with Japan.

The decision comes just weeks after Andhra Pradesh cancelled a joint project with a Singapore consortium to develop the commercial core of Amaravati, the new state capital.

Singapore has been involved in the creation of the new capital city, which was initiated by former chief minister Chandrababu Naidu.

The review of the bullet train project comes less than two weeks before a visit by Japanese Prime Minister Shinzo Abe, who attended a groundbreaking ceremony for the project in 2017. The project has the backing of Mr Modi, who is keen on getting the fast train to India.

Maharashtra Chief Minister Uddhav Thackeray - who also cancelled a controversial metro train parking shed project - has ordered a review of infrastructure projects in the state, which is already saddled with billions of rupees in debt.

"We will then take a decision on what needs to be done on a priority basis," he said.

The high-speed rail project, which would see Japan bring its Shinkansen technology to India, was to have been built at a cost of US$16 billion (S$22 billion), with the government in New Delhi initially targeting completion by 2023. 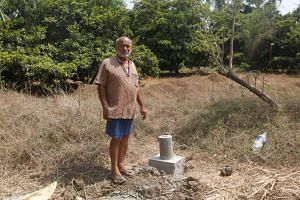 The rail link would have cut travel time between the city of Ahmedabad and Mumbai, the country's financial capital as well as the state capital, from the current eight hours to under three hours.

Japan was to provide a loan covering 81 per cent of the project cost at an interest rate of 0.1 per cent per annum, with the repayment stretched over 50 years. The remaining costs were to be shared between Gujarat and Maharashtra.

But the project became a political issue in the state polls last month as a result of opposition from dozens of farmers and tribal groups who refused to give up their land.

Maharashtra minister Jayant Patil said: "Some big projects are needed in the larger interests of Maharashtra. But we are considering if we can put on hold some projects like the bullet train."

The uncertainty over such a big-ticket project after the developments in Amaravati comes at a time when the Indian economy is losing momentum.

Growth slowed to 4.5 per cent in the July-September quarter, the slowest in six quarters and a far cry from the 8.1 per cent at the beginning of last year. Unemployment has also been rising, while consumption is declining.

The Modi government has taken a series of steps to boost growth and attract investments, including opening up different sectors to foreign investment, lowering interest rates and slashing corporate taxes.

India's states hold the key to its economic destiny

But these moves have so far failed to stem slowing growth.

Now, a certain amount of policy uncertainty has been added to the mix.

Mr Rishi Sahai, the managing director of Cogence Advisors, an investment bank, said: "As soon as there is a change in the state government, it will trash projects undertaken by the previous government. This will have an effect on foreign investors coming into infrastructure, renewables like solar energy, smart cities and in railways. These are the sectors where we desperately need cash."

Professor Biswajit Dhar of Jawaharlal Nehru University said: "The macro-economic situation is not conducive for foreign investors to come in... A hallmark of India's reforms is that policies have been largely consistent. But now you can't say that with any degree of certainty. There have been policy reversals. State governments don't want to look at the larger picture."

Official figures show foreign investment inflows into India increased in the last financial year to US$62 billion in the 2018-2019 period. In the previous financial year, the inflows were US$60.97 billion.

Analysts said the reviews of the state projects were also rooted in politics.

Dr Sandeep Shastri, the pro-vice-chancellor of Jain University, said: "It is a reflection of the political differences. In both cases, a new government came in and reversed the decision of the earlier government. But... the parties which were voted into power had stated their position earlier. (Andhra Pradesh Chief Minister) Jagan Reddy had red-flagged Amaravati."