NEW DELHI (REUTERS) - An Indian political party has threatened to end an alliance with Prime Minister Narendra Modi's ruling party in a dispute over concessions to lure investors to a southern state, in what could become the second such departure before 2019 general elections.

But Mr Modi's party has shown resilience by winning state polls across India to consolidate its position, despite a similar snapping of ties in January by another powerful regional party, the Shiv Sena, based in Mumbai, the financial capital.

Two federal ministers of the Telugu Desam Party (TDP) will resign on Thursday (March 8) after Finance Minister Arun Jaitley denied "special category" status to Andhra Pradesh, the state ruled by the party, and from which a new state was carved in 2014.

Although Mr Jaitley said Andhra Pradesh would still get special financial assistance from the federal government, the southern state's ruling party said that was not enough.

"As a first step, our ministers won't be part of the central government," the state's Chief Minister N. Chandrababu Naidu, who is also the southern party's president, told reporters on Wednesday night.

"As the next step, we will take a decision on whether to continue with NDA or not. It's a crucial time. We have to stand, we have to fight, we have to get it done." The NDA, or National Democratic Alliance, is led by Mr Modi's Bharatiya Janata Party (BJP).

A BJP spokesman did not immediately respond to a request for comment. 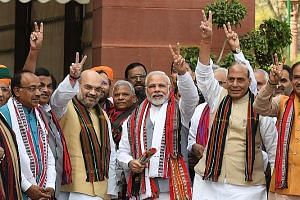 Both ministers are expected to issue statements in parliament on Thursday before submitting their resignations, said a government source in Andhra Pradesh, who declined to be identified as he is not authorised to talk to media.

Federal authorities formerly gave "special category" status chiefly to hilly states, whose rugged terrain made it difficult for them to compete with other states in attracting investments.