MUMBAI (AFP) - Indian investigators on Thursday (Feb 15) raided the premises of a billionaire jeweller accused of defrauding one of the country's biggest banks.

The Press Trust of India (PTI) news agency reported that investigators searched around half a dozen locations in Mumbai, including Modi's home, as well as stores in New Delhi and Surat.

A spokesman for the ED refused to comment when contacted by AFP.

Modi is one of India's richest men. He is worth US$1.73 billion according to Forbes, placing him 85th on India's rich list.

The 47-year-old is the founder of jewellery giant Firestar Diamond. His high-end Nirav Modi brand has stores in several of the world's major cities. 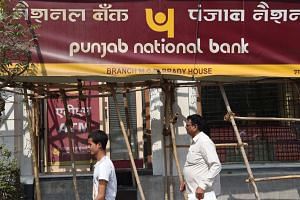 Wednesday's raids came a day after the ED registered a money laundering case against Modi and a few others, including members of his family and a business associate.

It followed PNB's complaint last month to India's top investigating agency, the Central Bureau of Investigation (CBI), that it had been defrauded of 2.8 billion rupees.

The bank, India's second-largest state-owned lender, announced on Wednesday that it had also detected fraud of US$1.77 billion at a single branch in Mumbai, sending its shares plummeting.

It made fresh allegations against Modi to the CBI, according to the PTI news agency.

The trouble comes as India's government is trying to reduce the crippling debts of the country's embattled lenders, including PNB.

It recently announced a US$32-billion recapitalisation plan for state-owned banks to help them clean up their books.

PNB shares were down almost 6 per cent Thursday.