The four men accused of the gang-rape and murder of a 27-year-old woman near the Indian city of Hyderabad were shot dead during an alleged botched escape attempt - in a development that earned the police both criticism and praise.

They had been taken to the crime scene by the police as part of the investigations. According to reports in Indian media, the men tried to steal police guns and escape, but were killed by the police in crossfire during the effort to recapture them.

"The accused were killed in a police encounter in Chatanpally, Shadnagar, in the wee hours between 3am and 6am," Cyberabad police commissioner V.C. Sajjanar told Indian media.

The rape of the woman, a vet, had triggered public outrage across the country amid heated debates on the lack of safety for women, even inviting calls for introducing castration and public lynchings.

The victim, who cannot be identified by law in India, was attacked and set on fire on Nov 27. She had parked her scooter near a toll booth and, upon her return, found that the scooter had a puncture.

Just before she was ambushed, she had called her sister, saying she was scared. The victim's charred remains were found the next day and the alleged attackers were arrested two days after the murder.

Reactions to the deaths of the four suspects yesterday poured in from across the country.

Some celebrated the news while others wondered if this was a breakdown of law and order and an instance of an extrajudicial killing. 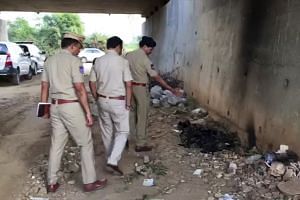 As outrage mounts over rape in India, a victim is set ablaze on way to court

The deaths also come amid deep frustration over a slow judicial system and instances of shoddy investigation by the police.

Television news channels showed crowds cheering and setting off firecrackers in celebration at the scene of the killings.

The vet's family expressed satisfaction over the deaths of the suspects. "It has been 10 days to the day my daughter died. I express my gratitude towards the police and the government for this. My daughter's soul must be at peace now," said the victim's father, who cannot be identified.

But just as vocal were those who questioned whether this was a breakdown of law and order in the South Asian country. Some even wondered if the right culprits had been caught.

"All those who will say that the four got what they deserved, remember their guilt had not been established. One or more of them could have been innocent. Just because they had been arrested did not mean they were guilty. This can happen to anyone now. Down the abyss we go," journalist and political analyst Sumanth Raman wrote on Twitter.