AYODHYA, INDIA (REUTERS) - In the Indian town of Ayodhya, minority Muslims are feeling under siege as they await a Supreme Court ruling on a centuries-old religious dispute that has cast a shadow over their relations with the majority Hindu community.

After a tangle of legal cases, the Supreme Court in August decided to hear arguments every day in an effort to resolve the dispute over what should be built on the ruins of the 16th century Babri Masjid, destroyed by a Hindu mob in 1992.

The uproar over the mosque triggered some of India's deadliest riots, in which nearly 2,000 people, most of them Muslim, were killed.

The bloody controversy raised lingering questions about the role of religion in the officially secular country, and the place of Muslims in it.

Last month, Chief Justice Ranjan Gogoi finished the hearings and is expected to pronounce his verdict in the next couple of weeks.

Whichever way it goes, the decision is likely to have a significant impact on the fraught relationship between India's Hindus and Muslims, who constitute 14 per cent of its 1.3 billion people.

While most Muslim religious leaders want the mosque to be rebuilt, Hindus say there is evidence there was a temple on the site before the mosque was built in 1528 by a commander of Babur, the founder of the Mughal dynasty.

Construction of a "grand temple" in Ayodhya has long been an election promise of Prime Minister Narendra Modi's Hindu-nationalist Bharatiya Janata Party (BJP), which won a second term with a landslide this year.

Fearing tension after the court decision, Mr Mohammed Shahid, 48, the grandson of the mosque's last Imam, or prayer leader, has decided to move his family away. 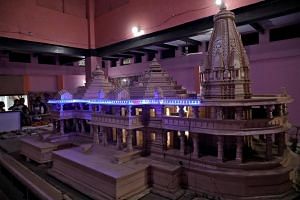 He has reason to be afraid.

Mr Shahid's father, Mr Mohammed Shabir, was killed by a mob of Hindus who rampaged through Ayodhya before tearing down the mosque on Dec 6, 1992.

"In 1992, we decided to stay put - a decision that we live to regret," Mr Shahid said, sitting in the courtyard of his rundown, two-storied house.

"Other than killing my father, they set ablaze our house and a sawmill, our only source of income."

Mr Shahid said he was glad that his grandfather, who had died in 1990, did not see the destruction of the mosque.

But he shares Mr Shahid's anxiety.

"We're conscious of the fact that some bad elements can try to foment trouble by taking advantage of the situation and that's why I've requested the authorities to ensure the safety of Ayodhya's Muslims," Mr Ahmad said.

Mr Ahmad said India's founding fathers established it as a secular democracy, and it must remain that.

Mr Lal was among the hundreds of Hindus who destroyed the mosque with shovels, hammers and their bare hands, bringing down its domes before the whole structure collapsed.

Unfortunately for Mr Lal, part of the building fell on him, trapping him in the rubble with broken bones.

"Since that fateful day of 1992, the only objective of my life is to see a permanent temple on the site. I can die in peace if I get to see the temple," Mr Lal said.

For Hindus, Mr Lal said, the site in Ayodhya was as sacred as Mecca is in Islam.

That's because Mr Lal and millions of other Hindus believe the mosque was built at the birthplace of Lord Ram, one of their most revered deities.

Mr Lal helps to guide a steady stream of pilgrims who come to see a model of what they hope will become a new temple.

Visitors can also look at an open field of masonry, in pink sandstone, including piles of ornately carved columns. Concrete pillars and blocks for foundations are also ready.

"Once the court green-lights construction of the temple, we can quickly move these concrete blocks from the workshop to the temple site," said Mr Sharad Sharma, spokesman for the Vishwa Hindu Parishad, or World Hindu Council.

Top politicians, including some Cabinet ministers, regularly visit Ayodhya to pay their respects to Mr Nritya Gopal Das, an influential monk and chairman of a trust committed to building the temple.

"I'm sure Modi ji is aware of the sentiments of millions of Hindus who have been endlessly waiting to see the Ram temple,"said Mr Das, using an honorific for Mr Modi.