NEW DELHI (AFP, REUTERS) - An Indian court on Monday (April 18) issued an arrest warrant for the embattled liquor tycoon Vijay Mallya, who left the country last month amid pressure from lenders to repay about US$1.4 billion (S$1.9 billion) in debt owed by his defunct Kingfisher Airlines.

Mallya's case takes centre stage at a time when India's government and central bank have begun to crack down on bank loan defaulters, in a drive to clean up ailing state-run banks.

The 60-year-old liquor baron, once dubbed the King of Good Times, left India on March 2 despite calls for his arrest and is believed to be in Britain. 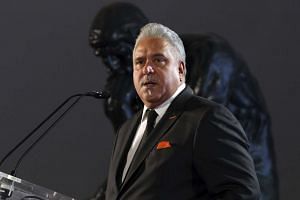 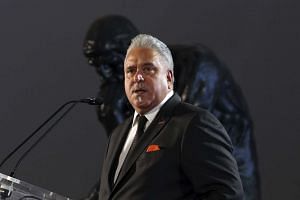 "The court today issued a non-bailable warrant against Vijay Mallya at our request," said a senior officer at the Enforcement Directorate, the government's financial crimes investigator, speaking on condition of anonymity.

The official said the directorate would now decide how to proceed against Mallya and may seek his extradition from Britain.  “We will deliberate before deciding our next step,” he said.

The move comes days after India suspended Mallya’s passport at the request of the Enforcement Directorate, which had issued a series of summons for the businessman to appear before it.

It has reportedly accused him of siphoning off money from a bank loan made to his now-defunct Kingfisher Airlines to buy property abroad.

A lawyer for the airline on Monday denied that charge in the special Prevention of Money Laundering Act (PMLA) court that is hearing the case in Mumbai.

In a statement issued before the arrest warrant, Kingfisher Airlines’ owner the UB Group said it was “shocked at the allegation made by the Enforcement Department before the PMLA Court”.

“Multiple investigations have been going on since July 2015 and this allegation has never been made,” it said late on Sunday.  “In order to explain foreign exchange remittances, all of which have been fully accounted for, we will provide full details in the next few days.”

The company said the Enforcement Directorate’s basis for seeking a warrant against Mallya was “erroneous and unjustified”.

India and Britain signed an extradition treaty in 1993.