NEW DELHI/MUMBAI (REUTERS) - Indian billionaire jeweller Nirav Modi, one of the prime accused in the country's largest ever bank fraud, denies allegations levelled against him by Punjab National Bank (PNB), his lawyer said on Tuesday (Feb 20), as the country’s financial crime fighting agency investigates more than 100 “shell companies” suspected to be involved in the fraud.

"There is nothing, there is nothing in it," Mr Vijay Aggarwal, a lawyer representing Mr Modi, told Reuters, referring to the police complaint filed by PNB that alleges that companies linked to Mr Modi and one of his relatives received credit worth nearly US$1.8 billion between 2011 and 2017 using false guarantees supplied by two bank officials.

Mr Aggarwal, speaking by telephone, declined to comment on where Mr Modi was. Indian officials are on the lookout for Mr Modi and his family, whom police say left India in January prior to the case being filed.

"Everything is documented," Mr Aggarwal said of Mr Modi's dealings with PNB, adding that the state-owned bank had regularly levied fees on its dealings with the jeweller's firms.

According to a police complaint by PNB, the two officials at a Mumbai branch of the bank steered fraudulent loans to companies linked to Mr Modi and entities tied to jewellery retailer Gitanjali Gems, which is led by Mr Modi's uncle, Mr Mehul Choksi.

India’s financial crime fighting agency is investigating more than 100 “shell companies” that are suspected to be involved in the fraud, a government source said on Tuesday.  The companies were allegedly used by Mr Modi and Mr Choksi to route funds, a source at India’s Enforcement Directorate told Reuters. 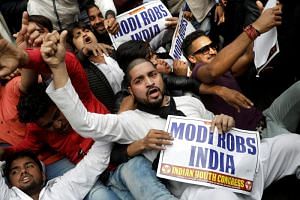 Mr Choksi, who has also left the country, has not commented. Gitanjali, in a stock exchange filing, has denied Mr Choksi's involvement in the alleged fraud.

Five bank officials, including the two at the Mumbai branch, have been arrested.

The fraud case has stunned financial markets and it sent PNB shares tumbling for a fifth straight trading day on Tuesday.

Shares in PNB, which has shed nearly a third of its market value since disclosing the fraud, were down 3.5 per cent in early trading after rating agency Fitch placed the bank on negative watch. Later, Moody's also placed the bank's ratings under review for a downgrade.

Separately, in a letter to PNB officials, Mr Modi stated that his companies owe the bank under 50 billion rupees (S$1 billion), much lower than the amount alleged by the bank. He also said PNB has jeopardised its chances of recovering the sums owed by going public with its allegations.

"The erroneously cited liability resulted in a media frenzy which led to immediate search and seizure of operations, and which in turn resulted in Firestar International and Firestar Diamond International effectively ceasing to be going-concerns," he wrote in a letter seen by Reuters.

"This thereby jeopardised our ability to discharge the dues of the group to the banks."

“Your actions have destroyed my brand and the business and have now restricted your ability to recover all the dues,” said Mr Modi in the letter, accusing PNB of acting in haste and noting that his firm has always been current on paying its dues.

Five bank officials, including the two at the Mumbai branch, have so far been arrested.  The alleged fraud occurred as one PNB deputy manager, with the assistance of one or more colleagues, issued over 100 fraudulent Letters of Undertaking – essentially guarantees sent to other banks so that they would provide loans to a customer.

After entering the transactions on the SWIFT messaging system, the official, who worked at the same branch from 2010 to 2017 despite normal bank practices of regular rotations – did not record them on PNB’s internal system, according to the bank’s complaint.

A PNB source said on Tuesday all its branches have now been asked to reconcile SWIFT messages with entries in their core banking system going back eight or nine years.

The bank has also asked branches to ensure no clerical staff stays in one office for more than five years, and officers no more than three years, the source said.

The fraud case has stunned financial markets and it sent PNB shares tumbling for a fifth straight trading day more than a quarter of its market value since disclosing the fraud. The stock was down about one percent at 0930 GMT.  Rating agency Fitch placed the bank on negative watch. Later, Moody’s also placed PNB’s ratings under review for a downgrade.

“PNB’s capital position would deteriorate markedly, and fall below minimum regulatory requirements, if the bank is required to provide for the entire (fraud) exposure,” Moody’s said in a note on Tuesday.