Padukone is praised by some for backing students; others urge boycott of her new film

MUMBAI • An Indian actress who joined students protesting against the government drew calls on social media yesterday for a boycott of her upcoming film, as well as praise for being a rare Bollywood A-lister to stand up against a crackdown on dissent.

Her act of solidarity came after masked men wielding sticks and rods stormed the JNU campus on Sunday, injuring some 30 people.

Students at JNU, regarded as a left-wing bastion, have been protesting for months against an announced fee hike as well as a new citizenship law, which critics say discriminates against Muslims and erodes India's secular Constitution.

The student union has denied the allegations, blaming left-wing groups for the violence.

Pictures circulating online showed a solemn-faced Padukone standing behind an injured student leader, whose head was covered in a bandage. That set off a social media storm, with calls for a boycott of her film Chhapaak (Splash), which is set to be released tomorrow.

#BoycottChhapaak was Twitter's top trending topic in India yesterday, with more than 350,000 tweets on the subject. The film is based on the true story of a woman who survived an acid attack and went on to rebuild her life.

"What a brazen & cheap tactic to promote a film!" wrote one Twitter user about Padukone. 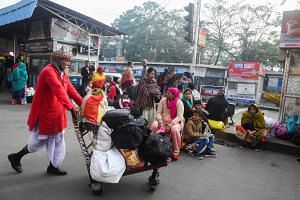 Tens of thousands strike in India as slowdown hits jobs

"She chooses JNU where leftists who want to break India dominate!" tweeted another.

But some Bollywood figures lauded Padukone and vowed to support her film. "Let's all those who stand against the violence go to #bookmyshow and show them," tweeted director Anurag Kashyap.

"We are proud to see so many voices from the film industry take the lead. More power to you @deepikapadukone. Bravo!! #ISupportDeepika," tweeted the youth wing of the main opposition Congress party.

The protests sweeping India in the last few weeks have posed a dilemma for Bollywood, which has some big-name Muslim actors but is sensitive to the sentiments of the country's Hindu majority.

"The reason a whole lot of stars back away from making statements is because they are afraid of the consequences it will have on their films," said brand consultant and columnist Santosh Desai.

"To do this so close to a film release is certainly risky."