NEW DELHI • Indian Prime Minister Narendra Modi's administration will divert water from Pakistan as India continues to look for non-military ways to punish its nuclear-armed neighbour for a deadly terror attack in Kashmir.

On Thursday, India announced projects that will stop its share of water in the Indus river basin from flowing into Pakistan, water minister Nitin Gadkari said in a series of tweets. The projects will divert water from the Ravi and Beas rivers for use in the states of Punjab as well as Jammu and Kashmir.

The decision comes after 40 paramilitary soldiers in Kashmir were killed in an attack last week claimed by Jaish-e-Mohammad, a Pakistan-based terror group. It was the worst terror strike since Mr Modi came to power in 2014 and comes just months before the country's general election.

New Delhi has blamed Islamabad, though Pakistan's government has denied any role.

Still, the scope for escalation is limited. Both South Asian nations have nuclear weapons, so any military strike risks a miscalculation that could trigger a devastating conflict in one of the world's most populous areas.

India instead has been desperate to find other ways to pressure Islamabad.

So far, it has moved to isolate Pakistan diplomatically, scrapping the most-favoured-nation status it granted and slapping 200 per cent duties on imports. 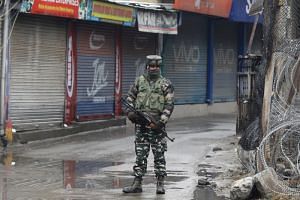 It had threatened to review the 1960 Indus Waters Treaty after a previous attack in Kashmir 21/2 years ago.

"Timing is always important when you want to give a political message - it's a message that India has given," said senior researcher Uttam Sinha at the Institute for Defence Studies and Analyses in New Delhi.

The new measure will stop the flow of large quantities of India's share of water that currently flows to its neighbour, he added.

Pakistan's foreign ministry spokesman yesterday said the Indian government and media were whipping up a "frenzy" that was now endangering the lives of Kashmiris in India and may have caused the death of a Pakistani prisoner held in an Indian jail.

A version of this article appeared in the print edition of The Straits Times on February 23, 2019, with the headline 'India to stop its share of water from flowing into Pakistan'. Subscribe
Topics:
More
Whatsapp Linkedin FB Messenger Telegram Reddit WeChat Pinterest Print Copy permalink