NEW DELHI  -  India announced a host of measures on Friday (Nov 10) to combat the toxic smog engulfing its capital New Delhi, including spraying water over the city, restricting vehicles on the road and providing free buses.

The pollution crisis, which has shut down schools and driven thousands to hospitals, has been blamed on vehicle emissions, burning of crop stubble and the onset of winter, which traps pollutants in the atmosphere.

“Sprinkling water is the only way to bring down the dangerous pollution levels,” said Ms Shruti Bhardwaj, the environment ministry’s official in charge of monitoring air quality, reported newsire service Reuters. The plan involves spraying water from a height of 100 metres, although it was not clear how it would be executed.

The Delhi government - led by Chief Minister Arvind Kejriwal who has referred to his city as a “gas chamber” - is planning to reintroduce the odd-even car scheme from Nov 13 to 17, which means people will only be able to drive their cars on alternate days.

To encourage commuters to use public transport, an additional 500 new buses will hit the roads offering free bus travel next week. Parking fees were hiked four-fold, from 20 rupees (S$0.42) to 80 rupees per hour.

Meanwhile the country’s powerful National Green Tribunal on Friday rapped the state authorities for not taking action earlier. The court had banned all construction activities in Delhi until Nov 14. It had also directed that water be sprayed in severely-polluted areas and that the roads be cleaned after spraying.

This week India’s capital, which has a population of over 16 million people, has seen pollution levels spike with the Indian Medical Association calling it a health emergency.

The Centre for Science and Environment said some of the measures the city needs include a massive augmentation of public transport, stringent monitoring of emissions in industrial estates and a transition to natural gas and clean fuels. 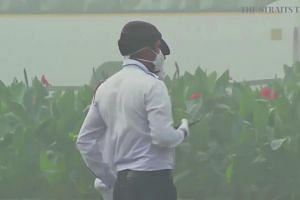 Delhi to restrict car use as smog envelopes India, Pakistan

Meteorologists on Friday said pollution levels, though still in the severe category, were starting to come down as winds were picking up over the city, dispersing pollutants.

“As per our prediction, although it is still severe, it will drop down considerably. We are expecting it will go down further tomorrow,” said Dr Gufran Beig, chief scientist at India’s state-run System of Air Quality Weather Forecasting and Research (Safar).

He forecasts that by Monday, PM2.5 levels - which measure the concentration of fine particulate matter in the air - would fall from 500 microgams per cubic metre currently to 240 microgams pcm. These very fine particles are linked to higher rates of chronic bronchitis, lung cancer and heart disease.

Mr Nikhil Pahwa, founder of MediaNama, a mobile and digital news portal, ventured out on Friday after days of remaining indoors and said he wore a face mask at all times.

“I have spent 80 per cent of my time in a single room with two air purifiers. I am barely stepping out. Today is the first day I have stepped out since Sunday. I had a work commitment, otherwise I am not stepping out at all,” said Mr Pahwa.