On Tuesday, at the inauguration of the African Development Bank meeting, Mr Modi said India and Japan had been in discussions about the growth corridor and were willing to partner with other countries to push development in Africa.

The five-day meeting, which was held in Mr Modi's home state of Gujarat, ended yesterday.

"The idea is that India and Japan, along with other willing partners, work jointly in sectors such as skill development, information technology, manufacturing, health and connectivity," Mr Modi said, noting he would be discussing the idea in more detail with the African nations.

"After assuming office in 2014, I have made Africa a top priority for India's foreign and economic policy," he told the gathering of 3,000 delegates. 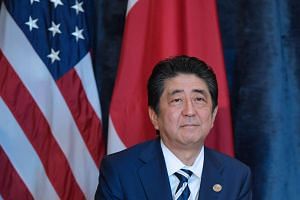 Sino-Japan rivalry heats up over Africa

This is the first major meeting of its kind between India and Africa since the India-Africa summit in 2015, even though over the last three years, Indian dignitaries have visited all African nations with which India has diplomatic ties.

Though India cannot match China in terms of the volume of trade or investments, some now see an opportunity for India to increase its visibility in Africa with the Indian economy estimated to grow at around 7 per cent this year amid a slowdown in the Chinese economy.

Professor Srikanth Kondapalli, a professor in Chinese studies at the Jawaharlal Nehru University, said India would be keen to boost ties, particularly against the backdrop of China's Obor forum, which took place in Beijing on May 14.

India had boycotted the meeting because Obor includes the China-Pakistan Economic Corridor, which passes through Kashmir, a disputed territory claimed by both India and Pakistan.

"Japan, US and India decided three or four years ago to coordinate in Africa... Now, of course, the Obor is the larger context," said Prof Kondapalli. "However, only two African countries were represented in the Obor forum last week. I heard the Kenyan President saying Africa is under-represented."

The African Development Bank meeting also saw further discussions between India and Japan on a partnership in Africa.

Analysts said that the focus on Africa has gone up under Mr Midi.

"There is strategic interest with concerns about China taking over Africa and its resources. We want to be there too. But we are doing it differently in areas such as capacity building and human resource development," said former Indian foreign secretary Lalit Mansingh.

A version of this article appeared in the print edition of The Straits Times on May 27, 2017, with the headline 'India to boost ties in Africa after China's Belt and Road push'. Subscribe
Topics:
More
Whatsapp Linkedin FB Messenger Telegram Reddit WeChat Pinterest Print Purchase Article Copy permalink