Modi says test, which puts nation in exclusive club, not directed at anyone

India shot down a low-orbiting live satellite in a missile test that has made it only the fourth country with such capabilities, in a major leap forward for its ambitious space programme.

Prime Minister Narendra Modi, who triggered much speculation after tweeting he had a major announcement, said in a televised address to the nation yesterday that a missile travelled nearly 300km from earth and hit the satellite within three minutes of its launch from a facility in Odisha, eastern India.

The test put India in an exclusive club of space superpowers that include the United States, Russia and China.

"Today, India has become the fourth country to acquire this status as a space power. There can be no bigger moment of pride for every Indian than this," said Mr Modi, who is in the midst of an election campaign.

The Prime Minister also maintained that the test, called Mission Shakti or strength, was not directed at any country.

"Today, I also want to assure the international community that the new capability we have developed is not directed against anyone. India has no intention to threaten anyone.

"This is an effort to secure a fast-growing India. India has always been opposed to the weaponisation of space and an arms race in outer space, and this test does not in any way change this position," said Mr Modi of the test carried out by the Defence Research and Development Organisation (DRDO). 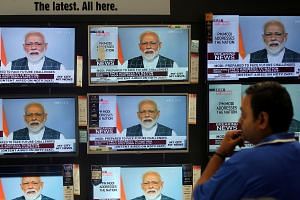 Should India aim for a manned space mission by 2022?

The target that was shot down was one of India's existing satellites operating in lower orbit, according to the Ministry of External Affairs, which listed responses to a series of frequently asked questions on its website.

"The test was done to verify that India has the capability to safeguard our space assets. It is the Government of India's responsibility to defend the country's interests in outer space," the ministry said.

India's space programme has grown to become a leader in the over US$300 billion (S$407 billion) global space industry for its reliable, low-cost launches that have attracted a growing global clientele.

India has in recent years also moved into space exploration with the successful 2013 launch of its Mars Orbiter Mission, which cost about 10 per cent of the US' Mars mission, and a human mission to space is in the works.

Despite claims that the test was peaceful, and not designed to create "an atmosphere of war", experts saythe latest launch showcases a new capability in India's space programme.

India had been developing an anti-satellite weapon in response to China, which first used a missile to destroy its own satellite in 2007.

The two countries, which went to war in 1962, are involved in a dispute over the Himalayan border.

"India has been readying its own capabilities and didn't want to be left behind. This is a deterrent capability against China," said Dr Rajeswari Pillai Rajagopalan, head of the Nuclear and Space Policy Initiative at Observer Research Foundation.

Mr Ajay Lele, a senior fellow at the government-funded Institute for Defence Studies and Analyses in New Delhi, added: "In the case of an actual war, you need to tell an opponent you have the same capability."

However, some observers noted that India was merely responding to other countries that have turned space into a "battlefront".

Today, India has become the fourth country to acquire this status as a space power. There can be no bigger moment of pride for every Indian than this.

"The US, Russia and China continue to pursue anti-satellite (ASAT) weapons. Space is being turned into a battlefront, making counter-space capabilities critical. In this light, India's successful 'kill' with an ASAT weapon is significant," tweeted Mr Brahma Chellaney, a strategic thinker and commentator.

With India in the midst of an election campaign, the launch also acquired political connotations with the ruling Bharatiya Janata Party led by Mr Modi.

The party noted that India had the capability for some years but that the previous Congress government had decided against doing a missile test.

The Congress party, in turn, stressed that the previous government had started the work for the launch.

Many wondered about the timing of the missile test.

"It (missile test) has important strategic value. At the same time, timing-wise, it is being done when there is a big domestic election going on. The timing is very interesting," said Dr Rajagopalan.