NEW DELHI (AFP) - India said Friday (Feb 16) it had suspended the passports of a billionaire jeweller and a diamond merchant accused of defrauding a state-run bank after reports they had left the country.

The authorities have registered a money laundering case against Modi, one of India's richest men and jeweller to top Hollywood stars including Kate Winslet and Naomi Watts.

Ministry spokesman Raveesh Kumar told AFP their passports had been suspended for four weeks and would be revoked if they did not provide a response.

"If they fail to respond within the stipulated time it will be assumed that they have no response to offer and the MEA (foreign ministry) will go ahead with the revocation," Kumar said in a statement.

According to media reports, Modi, who holds an Indian passport, left India on Jan 1 and his brother Nishal, a Belgian citizen, also departed from the country on the same day. It is unclear if they travelled together. Modi’s wife Ami, a US citizen, left on Jan 6. His business associate Choksi also left in January.

The authorities searched Modi's Mumbai offices on Thursday, a day after PNB said it had detected fraud of almost US$1.8 billion (S$2.36 billion) at a brand in the city.

The Central Bureau of Investigation on Friday carried out raids on more properties connected to the pair and said it had contacted Interpol to track down Modi. 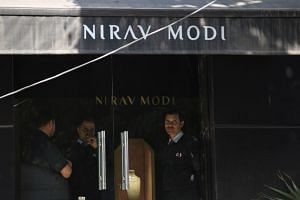 "We've reached out to Interpol with a request for a diffusion notice to track down Nirav Modi today," said CBI spokesman Abhishek Dayal.

Modi, the third generation of his family to go into the diamond trade, has not commented on the allegations. Firestar Diamond has previously said the earlier case was not connected to the company.

The 47-year-old is worth $1.73 billion according to Forbes, placing him 85th on India's rich list.

Hailing from a family of diamond merchants, he is one of India’s richest men and is known for his love of Bentley cars and expensive Italian suits.

From stores in New York’s Madison Avenue and Singapore’s Marina Bay to the red carpet at the Oscars, his luxury jewellery has long been popular with the rich and famous.