NEW DELHI - Singapore's Minister for Foreign Affairs Vivian Balakrishnan pushed India to engage more with Asean and urged the South Asian economy to increase aviation and maritime links with the grouping through Singapore.

Dr Balakrishnan was speaking on Tuesday (Oct 31) at the Singapore Symposium 2017 on the topic of "India, Singapore & Asean: Shared History, Common Future".

The Singapore Symposium was organised by the Institute of South Asian Studies (ISAS), at National University of Singapore (NUS) and Confederation of Indian Industry. India and Asean celebrate 25th anniversary of relations.

"Singapore has always been a believer in India's role in Asia and in Asean because Asean represents the 10 member states in South-east Asia. I can say with all honesty that we have always spoken up for India, we have always encouraged India to engage us and always done our best to ensure there is a seat at the table...." he noted.

He added that the sizeable amount of investments in India from Singapore, which included Sembcorp Industries power plant in Andhra Prapesh were "proof that we believe in India and India's potential.... and future". Singapore is among the top investors in India.

Singapore shares close political and economic ties with India and was instrumental in helping India forge close ties with Asean. 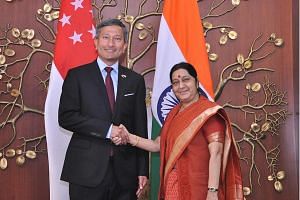 Singapore remains one of India's biggest foreign investors while Indian companies often use Singapore to raise funds for their global operations.

Citing tourism figures that showed India got half the amount of tourists that Singapore did, Dr Balakrishnan urged India to liberalise its aviation sector.

"If you think about India's size and population, natural resources and beauty and history and culture it cannot be that India is content with 8.2 million tourists."

Dr Balakrishnan, who is on a two-day visit to India, on Tuesday also co-chaired with Indian Minister of External Affairs Sushma Swaraj the Fifth Meeting of the India-Singapore Joint Ministerial Committee (JMC) for Bilateral Cooperation.

On Wednesday, he will be visiting the north-eastern state of Assam where he and Assam Chief Minister Sarbananda Sonowal will witness the signing of agreements to kick-start project implementation for the North East Skills Centre (NESC) in Guwahati. The NESC is Singapore's third skills centre in India.