NEW DELHI (BLOOMBERG) - From London to St Kitts, India is struggling to extradite businessmen it claims have fled the country after defaulting on billions of dollars of bank loans.

Now it hopes to stop others from leaving. The government has compiled a list of 91 people it is considering barring from leaving India because of their involvement with companies that have defaulted, said a person with knowledge of the matter.

The people were selected because of their roles as directors or owners of Indian companies which have been identified as so-called wilful defaulters, firms which refuse to repay loans despite having the means to do so, the person said, asking not to be identified as the information is private.

Some 400 Indian companies have been classified as wilful defaulters.

In addition, the government has asked Indian banks to provide passport details of a larger group of individuals who have signed applications or stood as guarantors for soured credits of more than 500 million rupees (S$10.1 million), the person said, declining to elaborate.

Some individuals from that group may also be barred from leaving the country if they are found to have committed fraud or engaged in wilful defaults, the person added.

Public anger against the government is mounting after two prominent jewellers left the country just before their alleged involvement in the nation's biggest bank fraud came to light.

Less than a month after first details emerged, lawmakers introduced a Bill that will give authorities the power to impound the assets of fugitive offenders - people who have fled the country after committing an economic offence involving 1 billion rupees or more.

Ex-billionaire Vijay Mallya lives on $9,000 a week after court order 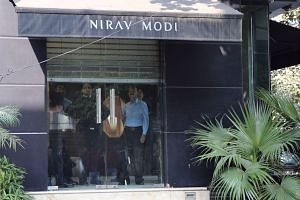 Some 31 Indians have fled abroad to avoid prosecution, lawmakers were told in Parliament on Wednesday (March 14). These include Vijay Mallya, the tycoon behind India's best-selling beer, who's becoming something of a fixture in London courts as he fights cases including extradition.

"It is logical that someone accused of an offence is not allowed to leave the country because extradition requires proof of criminal offence and it is difficult to establish this beyond doubt," Mr Aditya Puri, the chief executive officer of HDFC Bank Ltd, told the Times of India in an interview published last week. "Banks are custodians of public money."

With national elections due early next year, the government is under pressure to act against wealthy defaulters. India's regulator has also stepped up efforts to clean up US$210 billion (S$275.16 billion) of bad loans in the banking system, partly by tightening bankruptcy rules.

"There's a lot of pressure on the industry right now," said Mr Arpinder Singh, a partner at EY who oversees fraud investigations across India and emerging markets.

Finance Ministry spokesman D.S. Malik didn't respond to calls made to his mobile phone seeking comment on the government's steps.

"Those who had funnelled money overseas hoping to flee if the recovery push comes to shove will be worried," said Mr Kranthi Bathini, director of Mumbai-based financial advisory company WealthMills Securities Pvt. "While some horses have already bolted to countries with tough extradition laws, it is not yet too late to close the gates."