Despite the current frostiness in their relationship, India and Pakistan have agreed to open a visa-free religious corridor that connects Punjab in India with a key place of worship for Sikhs - a gurdwara - in Pakistan.

Officials from both countries signed the agreement yesterday at Zero Point on the international border in Dera Baba Nanak in Punjab.

The two sides are expected to hold separate events led by their respective prime ministers to open the corridor on Nov 9.

The move comes ahead of Sikhism's founder Guru Nanak's 550th birth anniversary on Nov 12, an occasion when Sikhs from across the world visit the Gurdwara Darbar Sahib located in Pakistan's Kartarpur, around 41/2km from the Indian border.

Guru Nanak spent his last 18 years in Kartarpur and the gurdwara was built in his honour after he died there in 1539. The erstwhile region of Punjab, where Sikhism was born, was divided in 1947 during the partition of British India.

The road corridor will be open to Indian pilgrims of all faiths as well as persons of Indian origin. It will help them avoid a current circuitous route via Lahore, which is about 120km from Kartarpur.

Some of Sikhism's important shrines are in Pakistan and are visited by thousands of Indian pilgrims each year. They have long complained of harassment because of complex visa regulations and other logistical hurdles. Around 5,000 Sikh pilgrims are expected to use the corridor every day.

The opening of the Kartarpur Sahib Corridor is a rare instance of cooperation between India and Pakistan. Ties between the two countries have been especially acrimonious since February, when India launched air strikes across the border in retaliation for a terror attack in Pulwama that India had blamed on Pakistan.

India's controversial decision to withdraw Jammu and Kashmir's special status in August and the ensuing lockdown have also been bitterly opposed by Pakistan.

Dr TCA Raghavan, a former Indian high commissioner to Pakistan and the current director-general of the Indian Council of World Affairs, told The Straits Times that the successful conclusion of the Kartarpur corridor talks showed India-Pakistan relations "rarely move in a linear way for long". 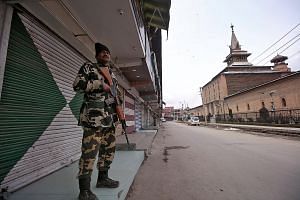 The pain of separation: Recalling India and Pakistan's birth traumas

He pointed out that most landmark people-to-people initiatives between the two countries have so far come in the context of an upswing in ties.

"That Kartarpur has come about amid a serious downturn in relations is unusual. It shows rather the complexity of the India-Pakistan interface and also how rapidly societies in both countries are changing," he said.

He was referring to the young populations in both countries who "have a new set of aspirations and want to get on with other things".

The opening of the corridor has, however, not been without problems. India initially opposed Pakistan's decision to levy a service fee of US$20 (S$27) per pilgrim per visit, only to accept it grudgingly in the agreement.

A statement from the Indian Ministry of External Affairs urged Pakistan not to levy such a fee "in deference to the wishes of the pilgrims", and said it would be willing to amend the agreement if such a decision is taken by Pakistan.

The opening of the corridor has also been opposed by some in India because of Pakistan's adversarial stance. "Pakistan not only exports terrorism to India but also has downgraded diplomatic relations with India, suspended bilateral trade, and cut off transportation links and postal services. Yet India agrees to sign a pilgrims' corridor agreement with Pakistan on the latter's terms," tweeted Professor Brahma Chellaney, a strategic affairs analyst.