UNITED NATIONS (AFP) - India and Pakistan traded insults at the United Nations on Saturday (Sept 29) after plans for a rare meeting between the foreign ministers in New York fell through.

Addressing the United Nations General Assembly, the Indian foreign minister denied that her government had sought a pretext to derail the offer to sit down with her Pakistani counterpart Shah Mehmood Qureshi.

"We are accused of sabotaging the process of talks," she said.

"This is a complete lie."

"Pakistan glorifies killers. It refuses to see the blood of innocents," she said. 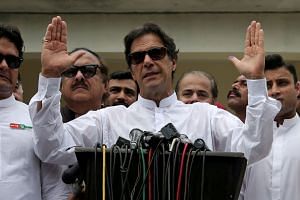 India has long accused Pakistan of arming rebel groups in Kashmir, a Himalayan territory divided between the two countries but claimed in full by both.

The Pakistani foreign minister shot back that India had called off talks three times - "each time on flimsy grounds".

"They preferred politics over peace. They used the pretext of stamps issued months ago of a Kashmiri activist and depicting grave human rights violations, including pellet gun victims, as an excuse to back out from the talks," said Mr Qureshi.

Indian media said the meeting between the foreign ministers would have been the first in nearly three years.

Mr Qureshi said Mr Khan's election two months ago had brought about "a fundamental shift" in Pakistan, which is seeking dialogue to resolve the Kashmir dispute.

Despite the call for talks, the foreign minister firmly warned India that violations of the ceasefire line in Kashmir "will evoke a strong and matching response".

India has about 500,000 soldiers in the part of Kashmir it controls, where armed groups are fighting for independence or a merger with Pakistan.

The pair have fought two wars over Kashmir, which has been divided since the end of British colonial rule in 1947.