Here are 10 key dates in the history of independent India.

Two centuries of British rule ends in August 1947 with the creation of Hindu-majority India and Muslim-majority Pakistan.

More than 15 million people are uprooted as Hindus, Muslims and Sikhs head for their new homelands. At least one million are killed in clashes between the religious groups during the chaotic partition.

In January 1948, independence hero Mahatma Gandhi is assassinated by a Hindu fanatic angered by the division of the subcontinent.

Independence splits the former Himalayan kingdom of Kashmir between the two new countries, which almost immediately go to war for total control of the territory. 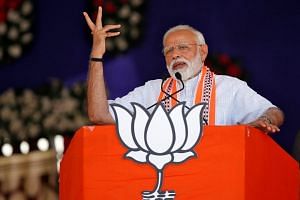 They agree in July 1949 to a United Nations-proposed ceasefire line that becomes a de facto frontier - the Line of Control - which remains today.

The neighbours fight a second war over Kashmir in 1965, and staged aerial attacks against each other over the frontier in February 2019.

In October 1962, Chinese troops pour over the disputed border with India amid a row about demarcation, sparking a four-week war that leaves about 10,000 dead on the Indian side before China withdraws.

In December 1971, India sides with the future Bangladesh in its war for independence from Pakistan, sending in troops and conducting bombing raids.

India conducts its first nuclear weapons test in May 1974, prompting Pakistan to launch its own nuclear programme.

In May 1998, India carries out several more tests and declares itself a nuclear power. Pakistan carries out its first nuclear weapons tests weeks later as their rivalry hit a new peak.

In October 1984, Prime Minister Indira Gandhi is shot dead by her Sikh bodyguards to avenge a brutal army assault on the Golden Temple in Amritsar to flush out separatists.

Her killing kicks off days of anti-Sikh pogroms in the Indian capital, which leave nearly 3,000 Sikhs dead.

In December 1984, about 40 tonnes of toxic gas leaks from a pesticide plant in the central city of Bhopal.

Around 3,500 people, mainly in shanties around the plant, are killed in the days that follow, and thousands more over the next years. It is considered the world's biggest industrial accident.

In December 1992, Hindu zealots tear down a 16th-century mosque in the northern town of Ayodhya so a temple can be built.

It sparks some of the worst sectarian violence since partition, with more than 2,000 people, mostly Muslims, killed nationwide.

Ten years later, a train carrying Hindu pilgrims returning from Ayodhya catches fire in the western state of Gujarat and 60 people are burnt to death.

Muslims are blamed and clashes erupt, leaving about 2,000 people dead. An inquiry in 2005 concludes the fire was accidental.

In November 2008, Islamic militants launch a three-day rampage of bomb and machine gun attacks in the financial capital that leaves 166 people dead.

The attack triggers huge demonstrations and puts India's treatment of women into the global spotlight. Four adults found guilty are sentenced to death.