NEW DELHI • The authorities in Indian-administered Kashmir said they eased restrictions in the region's main city for a third straight day yesterday ahead of a major Islamic festival, following India's move to strip the region of its constitutional autonomy and impose an indefinite curfew.

More than 250 ATMs were made functional in Srinagar and bank branches opened for people to withdraw money ahead of today's Eid al-Adha festival, city administrator Shahid Choudhary said in a tweet.

There was no independent confirmation of reports by the authorities that people were visiting shopping areas for festival purchases as all communications and the Internet remain cut off for a seventh day.

The authorities appear to be acting with utmost caution for fear of a backlash from residents who have been forced to stay indoors since Monday. The restrictions were briefly eased for the first time on Friday, when residents were allowed to attend mosque prayers.

The predominantly Muslim area has been on lockdown and under a near-total communications blackout to prevent unrest and protests after India's Hindu nationalist-led government said last Monday that it was revoking Kashmir's special constitutional status and downgrading its statehood.

Indian Prime Minister Narendra Modi said the move was necessary to free the region of "terrorism and separatism". Thousands of Indian troops have been deployed there.

On Saturday, Mr Rahul Gandhi, a leader of India's main opposition Congress party, said there were reports of violence and "people dying" in the region. Talking to reporters in New Delhi, Mr Gandhi said "things are going very wrong there", and called for the Indian government to make clear what is happening.

The authorities in Srinagar said on Saturday night that there had been instances of stone pelting by protesters, but "no gun firing by security forces" in the past six days. Television images showed cars and people moving in parts of Kashmir.

State-run All India Radio quoted the region's top bureaucrat, Chief Secretary B.V.R. Subrahmanyam, as saying that people were coming out of their homes for Eid shopping. Junior Home Minister G. Kishan Reddy said he expected the situation in Kashmir to become "fully peaceful" in 10 to 15 days.

The region's Chief Secretary B.V.R. Subrahmanyam is quoted as saying that people were coming out of their homes for Eid shopping. Junior Home Minister G. Kishan Reddy said he expected the situation in Kashmir to become "fully peaceful" in 10 to 15 days. 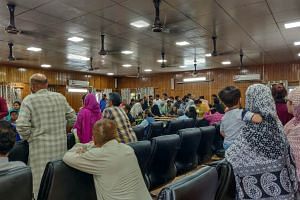 India to bring supplies to Kashmir; Pakistan to go to UN

On Thursday, Mr Modi assured the people of Jammu and Kashmir that normalcy would gradually return and that the government was ensuring the current restrictions do not dampen the Islamic festival.

Pakistani Prime Minister Imran Khan said yesterday on Twitter that India's crackdown was an attempt to change the demographics of Kashmir by introducing Hindu supremacy to the Muslim-majority area.

The Agence France-Presse reported that residents in Kashmir Valley said they were struggling to celebrate Eid al-Adha because of the security crackdown.

A mother, who gave her name as Razia, said she tried to explain to her daughter that she would not be able to buy her clothes to mark the occasion, as her husband fretted about feeding the family.

"What sort of Eid is this?" asked the 45-year-old in Srinagar. "We are not even allowed to move outside. My husband is a daily wage labourer but hasn't made any money for the last eight days."

A Congress party activist has already filed a petition challenging the communications blockade and the detentions of Kashmiri leaders.

Kashmir is claimed in its entirety by both India and Pakistan and is divided between the arch-rivals.