NEW DELHI (REUTERS) - India has declined to issue visas to two Chinese activists hoping to attend a conference on promoting democracy, days after it revoked a visa for an exiled ethnic Uighur leader who China says backs militant violence.

Lu Jinghua, a United States-based dissident, and Ray Wong, a pro-democracy activist, had applied for Indian visas to attend the meeting this week in the northern hill town of Dharamsala, the base of the exiled Tibetan spiritual leader, the Dalai Lama.

India rejects accusations that it is caving into Chinese pressure to stop dissidents travelling to the country.

On Monday (April 25), India said it had cancelled a tourist visa it had granted to exiled Uighur leader Dolkun Isa, who was due to attend the same conference. 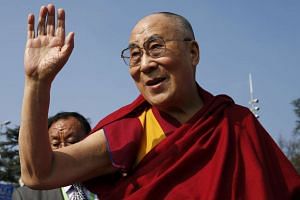 China blames unrest that has killed hundreds of people in its far western region of Xinjiang on Uighur militants looking to establish an independent state for the mostly Muslim Uighur minority.

A senior Indian government official said there were valid reasons for the denial of visas to the two Chinese activists.

Lu's visa documents were illegible and there was inconsistency about the purpose of her visit, the official said.

Lu told Indian television on Thursday that she was stopped from boarding her flight in New York.

Wong's documents included data inconsistencies, said the official, who declined to be identified.

Prime Minister Narendra Modi's Hindu nationalist government has sought to be more assertive with its neighbours, including China, and increase its influence, but it is also keen to deepen economic ties with China and attract its investment.

China accuses Isa of backing armed separatists in Xinjiang and its foreign ministry told media this week that Isa was wanted by Chinese police and was also on an Interpol "red notice" wanted list.