KOLKATA (AFP) - A Bangladeshi man who raped an elderly nun was sentenced to life in prison by an Indian court Wednesday (Nov 8), in a case that has fueled anger at high levels of sexual violence.

The 71-year-old nun needed surgery after the attack in March 2015 when a gang of robbers broke into the convent school where she lived in West Bengal state, eastern India.

"What happened to the elderly nun is a blot on West Bengal's legacy where Mother Teresa worked for the poor," additional judge Kumkum Singha told a packed court in state capital Kolkata, where church officials and some nuns from the convent were present.

On Tuesday, the court found Nazrul Islam guilty of rape and attempted murder, among other offences.

Five others arrested, found guilty of charges unrelated to the sexual assault, were sentenced on Wednesday to 10 years in prison.

The nun, who moved out of the state after the assault, travelled to Ranaghat and identified the accused from a police line up, chief public prosecutor Tamal Mukerjee told AFP. 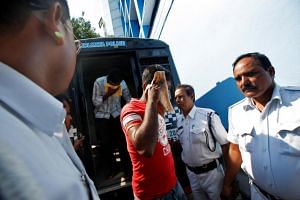 "She strode straight towards the accused and identified him by touching his hand," he said.

Thomas D'Souza, the Archbishop of Kolkata, told AFP: "The incident shook the conscience of people. It took the church a long time to recover from the ghastly incident."

The nun, who cannot be named for legal reasons, was attacked after the robbers ransacked the Convent of Jesus and Mary in Ranaghat and stole cash and other items.

A holy scripture was also torn and a statue of Jesus was broken.

Priests and schoolgirls took to the streets demanding justice.

Well-wishers closed shops, shuttered schools and held candlelit vigils outside the hospital where the nun underwent surgery for injuries suffered during the attack.

Police came under fire for perceived inaction after 10 men were detained, but no arrests made, despite the faces of some attackers being captured on CCTV footage.

Government data for 2015 shows 34,651 rapes in India were recorded, but campaigners say the true figure is likely to be much higher given the social stigma that still surrounds such cases.

India strengthened its laws on sexual violence after the fatal gang-rape of a Delhi student five years ago caused global outrage, but attacks remain widespread and enforcement is patchy.

The West Bengal attack also sent shockwaves through India's small Christian community, which was already reeling from a series of attacks on churches in the months before the assault.

The trial was relocated to Kolkata at the request of the assaulted nun, who expressed fear for her safety in Ranaghat, where the crime occurred.