NEW DELHI (Reuters) - India's top court said on Monday (Dec 21) it had no power to detain the youngest of the men convicted of the 2012 gang rape of a woman on a bus in New Delhi in a case that shocked the nation, a day after he was released after three years in custody.

The attack turned a global spotlight on the treatment of women in India, where police say a rape is reported every 20 minutes, and the sentence for the young man sparked debate over whether the country is too soft on young offenders.

The Supreme Court was hearing a petition from the Delhi Commission For Women demanding a longer sentence for the man, who was 17 at the time of the crime. He had received the maximum punishment of three years from the Juvenile Justice Board.

"Everything had happened in accordance with the law," the two judges said in their ruling. "We need legislative sanctions"to take any action, they said.

In 2012, the man and five adult companions lured the 23-year-old trainee physiotherapist and her male friend onto a bus in Delhi, where they repeatedly raped the woman and beat both with a metal bar before dumping them on a road. 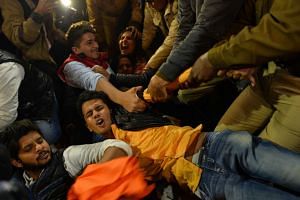 The woman died two weeks later of her injuries. Four of the adults were sentenced to death while the fifth hanged himself in prison. The death sentences have not been carried out.

Police accused the teenager of being violent, and said he pulled out part of the woman's intestines with his hands.

Ashok Verma, one of his lawyers, declined to comment.

Swati Maliwal, the head of Delhi Commission For Women, told reporters outside the court that the national government let India down by failing to change the law under which anyone below the age of 18 can only be sentenced to three years.

"In the end the court said we share your concerns," she said. "But the law is weak, we can't do anything."