India and China are looking at increasing soft power linkages as part of a new diplomatic engagement to reduce distrust between the two neighbours, which have a festering border row.

Chinese Foreign Minister Wang Yi, who is here on a four-day visit ending today, attended the first meeting of the India-China High-Level Mechanism on Cultural and People-to-People Exchanges.

He had talks with India's External Affairs Minister Sushma Swaraj last Friday, during which they agreed on "10 pillars of cooperation", including in film and television, educational cooperation, language teaching and tourism.

They also agreed to increase cultural and sports exchanges.

Some analysts, however, believe the impact of such moves would be limited, with the two countries having many areas of discord.

"Such initiatives will create goodwill and this is a positive step for the two countries. But it is of limited impact," said India's former foreign secretary Lalit Mansingh. "It doesn't take away from the strategic threats that India faces from China."

The two countries have growing economic ties, but also a festering border dispute which exploded last year over Doklam - also known as Donglang - an area claimed by Bhutan and China. New Delhi supported Bhutan's claims as the area is strategically close to India's Silliguri Corridor, a narrow stretch of land that connects the country's north-east to the mainland. 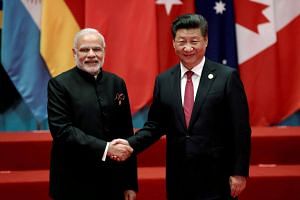 The border stand-off was eventually resolved through diplomacy and was followed by an informal summit between Prime Minister Narendra Modi and Chinese President Xi Jinping in Wuhan, where both sides agreed to look at ways to strengthen ties. Mr Xi will travel to India for the second informal summit next year, Ms Swaraj said.

The neighbours have other areas of stress, including China's growing ties with Pakistan and a widening trade deficit in favour of China.

During their meeting, Mr Wang focused on soft issues, while Ms Swaraj raised the issue of the trade deficit and also pushed for more market access for Indian goods.

Ms Swaraj told the media after the talks: "Our bilateral trade figure is continuing to rise. We need to find a solution to the trade deficit... We look forward to continued support from the Chinese side. We need to find market access in China for India."

China, which is in a trade war with the United States, has this year taken steps to reduce the trade gap, including exempting import tariffs on 28 drugs. But India has been pushing for more.

Dr Srikanth Kondapalli, a professor in Chinese studies at Jawaharlal Nehru University, said both countries want to manage ties and keep irritants in check. "Due to the trade war with the US, the Chinese don't want to open up various fronts (like a border row with India). The 28 drugs were a tactical move. And we want to focus on the economy, not on territorial disputes," he said.

By promoting "soft" issues such as people-to-people ties, said Dr Kondapalli, the Chinese side is trying to reduce the influence of "hard" issues such as the border dispute and trade deficit with India.

"But it doesn't work for India. Ms Swaraj did mention the trade deficit," he added.