COLOMBO (AFP) - Former Maldives president Maumoon Abdul Gayoom was released from jail on Sunday (Sept 30), a week after his estranged half-brother suffered a shock electoral defeat, raising hopes that other high profile political prisoners could soon have their convictions overturned.

Mr Maumoon, 80, and his legislator son Faris Maumoon, were released on bail by the High Court in Male, a week after strongman Abdulla Yameen's spectacular loss at the polls in the Indian Ocean archipelago nation.

Mr Maumoon's daughter Dunya, a former foreign minister, welcomed the release and said she hoped the sentences of other dissidents, including another former leader, Mohamed Nasheed, would soon be withdrawn.

"These are all politically-motivated convictions and I hope they too will be overturned soon, allowing ... Nasheed to return home," Ms Dunya told AFP by telephone from Male as Mr Maumoon returned home.

Nasheed, the country's first democratically-elected president, was convicted on a terrorism charge and sentenced to 13 years in prison in 2015. He obtained prison leave in 2016 and travelled to London for medical treatment and has remained abroad since.

Nasheed was barred from contesting the September 23 presidential election because of his conviction which the United Nations said was a travesty of justice.

Former foes Nasheed and Mr Maumoon both backed Mr Ibrahim Mohamed Solih to challenge Mr Yameen, who had locked up all his key political opponents or forced them to flee the country. 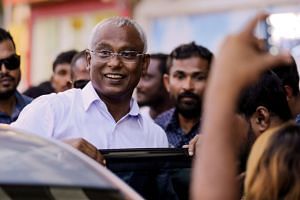 Maldives military backs 'will of the people' after election

Winds of change sweep over Maldives

Mr Maumoon had ruled the nation of 340,000 Sunni Muslims for 30 straight years till he was defeated by Nasheed at the country's first multi-party elections in 2008.

He supported Mr Yameen against Nasheed in a controversial run-off election in 2013 although the half-brothers later fell out and became bitter foes.

Mr Maumoon was arrested in February along with the country's Chief Justice and another Supreme Court judge on a charge of attempting to topple Mr Yameen. He declared a 45-day state of emergency to block impeachment.

Mr Maumoon was serving a 19-month jail term for obstruction of justice and was also under trial on a "terrorism" charge when the High Court ordered his release.

Another high profile Maldivian dissident, Qasim Ibrahim, was also granted bail. He, however, is not in the Maldives. He had obtained prison leave for medical treatment and has remained in Europe.

Almost all key opposition leaders and a number of ruling party dissidents had either been jailed or gone into exile in recent years under Mr Yameen who relied heavily on China for political and financial support.

Soon after his defeat, Mr Yameen freed five other political prisoners but was delaying the release of his half-brother who could have made a claim to the leadership of his PPM party.

Mr Yameen secured the leadership of the party on Friday.

His five-year term as president will come to an end on November 17 when Mr Ibrahim is due to be sworn in.