Hindu nationalist groups in India are again clamouring for the building of a temple on the site of a 16th-century mosque which was demolished by a Hindu mob over two decades ago, an incident many lamented as a betrayal of the country's secular tradition.

Many Hindus believe the Babri Masjid or mosque in the city of Ayodhya, in Uttar Pradesh, was built on land that was the birthplace of their deity, Lord Ram.

The right-wing Rashtriya Swayamsevak Sangh, the ideological backbone of the ruling Bharatiya Janata Party (BJP), has launched a nine-day rath yatra, or chariot procession, to highlight its demand that the government decree the temple's construction.

Another right-wing Hindu nationalist group, Vishwa Hindu Parishad (VHP), plans to stage a rally in the capital, New Delhi, on Sunday to push for a Bill on the temple in the federal Parliament.

BJP ally the Shiv Sena, a far-right political party whose primary base is in Maharashtra state, also plans to hold rallies in different parts of the country.

A group of Hindu nationalists had gathered on Nov 25 in Ayodhya to push for the building of the temple in the politically important central state of Uttar Pradesh which sends 80 MPs, the largest number of any state, to Parliament.

"We can't wait for infinity. Now Parliament is the only solution. The current government is committed. They will have to deliver it," said Mr Vinod Bansal of the VHP .

"We are going to make it a mass movement," he added, referring to the campaign to build the temple.

The BJP came to national prominence after Hindu hardliners razed the mosque on Dec 6, 1992, fanning communal tensions. The incident helped the BJP - with its message of Hindu nationalism - to emerge stronger on the political scene.

The construction of the temple has been a core promise of the BJP government. It has also been used as a political tool by the party to consolidate Hindu votes in parts of northern India, particularly in Uttar Pradesh. 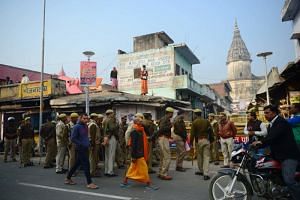 Ayodhya temple issue back in spotlight

The site on which the mosque stood is at the centre of a case being heard in the Supreme Court which has suspended an earlier decision by the Allahabad High Court.

In 2010, the Allahabad High Court ruled that the site should be split between Hindus and Muslims, but both groups challenged this decision, leading to the Supreme Court suspending it. The country's top court is due to hear the case in January.

The growing clamour for the temple comes ahead of a general election which is due next year.

Senior BJP national general secretary Kailash Vijayvargiya told Indian media that his party was the only one with the "guts" to see through the construction of a temple. However, he ruled out a government decree for doing so.

The increasingly strident tone on the issue was apparent on Wednesday, with a fortune teller beingjailed for threatening to set himself ablaze on the anniversary of the mosque demolition.

Security was tightened on the anniversary in Ayodhya yesterday, with 2,000 policemen on duty to prevent clashes.

Analysts said the BJP was keeping its options open while its supporters ramped up pressure on the issue.

"I don't think the leadership has decided what it is going to do," said Mr Nilanjan Mukhopadhyay, a Delhi-based journalist.

The temple issue comes amid a series of electoral losses for the BJP including in a by-election in its stronghold of Uttar Pradesh early this year. The ruling party is also facing flak on several issues, including the decision in 2016 to de-monetise high-value currency notes, farmers' unrest, poor implementation of the goods and services tax and rising unemployment.

"They (BJP) would like to keep it on the burner without doing anything about it. They are raising the temple issue because they believe that in certain parts of the country and in certain situations it will help," said Dr Sandeep Shastri, a political analyst and pro-vice-chancellor of Jain University.