Events to mark birth of independence icon started yesterday, and go on for 2 years

India yesterday kicked off celebrations to mark the 150th year of independence leader Mahatma Gandhi's birth next year, with events focusing on sanitation and cleanliness, along with tributes, exhibitions and even a flash mob.

The celebrations will take in Gandhi's 150th birthday on Oct 2 next year, and then continue for another year.

Railway Minister Piyush Goyal tweeted a video of a flash mob of 70 railway employees at Chhatrapati Shivaji Maharaj Terminus in Mumbai, dancing to a medley of songs to spread the message of cleanliness - in line with Gandhi's vision of a cleaner India.

The National Gandhi Museum in Delhi launched a special exhibition on Monday, featuring exhibits such as an audio recording of Gandhi's heartbeat, recreated from his electrocardiography details measured in 1937.

Gandhi, known as the Father of India, led the nation through a non-violent struggle to gain independence from British colonial rule in 1947. The day of his birth is also marked as the International Day of Non-Violence.

Across India yesterday, shops selling alcohol were closed and no alcohol was served in restaurants and hotels, out of respect for Gandhi.

Shops selling alcohol are also closed on other special days, like Independence Day and Republic Day.

He also talked of inclusive development of all sections. This is something we are talking about now.

He spoke of non-violence which remains relevant.

PROFESSOR BIDYUT CHAKRABARTY, from Jawaharlal Nehru University, and author of the book titled Social And Political Thought Of Mahatma Gandhi.

In paying homage to Gandhi, Prime Minister Narendra Modi spoke at the sanitation convention, and launched a meeting aimed at promoting renewable energy.

Mr Modi, joined by President Ram Nath Kovind, also led a ceremony offering floral tributes to Gandhi at his memorial at Rajghat, in the capital Delhi.

In his speech to the audience at the Mahatma Gandhi International Sanitation Convention, Mr Modi said: "I pay my respects to his dedication towards cleanliness. While fighting for the freedom of the country, Gandhi once said that he would give priority to sanitation over freedom and cleanliness."

On Gandhi's birth anniversary in 2014, Mr Modi launched a nationwide campaign called the Clean India Mission, which aims to modernise sanitation and build toilets in every home.

The government has said the sanitation drive is a success, even as critics point out that sanitation levels remain poor in many parts of the country.

Meanwhile, many people took to social media to express what Gandhi meant to them.

#MahatmaGandhi is beyond territorial boundaries. He is a source of inspiration for the whole world - this rendition of ‘Vaishnav Jan To’ by artists from 124 Nations is a lovely tribute to the memory of Pujya Bapu. #Gandhi150 pic.twitter.com/wI8mAWYc54

Congress President Rahul Gandhi tweeted: "Gandhi is not an immobile statue, he is a living set of ideas and values flowing through India. Truth and non-violence, which he lived for and was killed for, are the foundation of our country. True patriots must protect them." 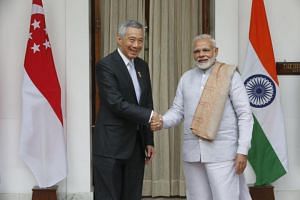 Singapore and India: A shared vision for a clean future

Jawaharlal Nehru University professor Bidyut Chakrabarty, the author of a book titled Social And Political Thought Of Mahatma Gandhi, said: "He was critical of rapid industrialisation... saying it destroys the environment...

"He also talked of inclusive development of all sections. This is something we are talking about now. He spoke of non-violence, which remains relevant."

Amid the celebrations yesterday, thousands of protesting farmers were stopped at Delhi's border with Uttar Pradesh state. The farmers were demanding farm loan waivers and crop insurance, among other things.