ISLAMABAD (AFP) - Pakistan's jailed former Prime Minister Nawaz Sharif was moved back to prison from hospital on Tuesday evening (July 31) after doctors signalled an improvement in his health, a minister said.

Sharif was shifted to Pakistan Institute of Medical Sciences(PIMS) in Islamabad two days ago after he reportedly fell sick inside prison.

Sharif and his daughter Maryam Nawaz were jailed on July 13 after a court sentenced them to 10 and seven years respectively over properties in Britain which emerged in the wake of Panama Papers revelations.

"The former Prime Minister is being shifted back to Adiala jail after doctors so advised," Shaukat Javed, the caretaker home minister for Punjab province, told AFP.

He said Shari wanted to go back to jail in Rawalpindi because he was unable to carry out his daily walk, adding that the former PM had been taken to hospital "against his will".

Sharif, who claims he is being targeted by the country's powerful security establishment, is fighting for his political life after his Pakistan Muslim League-Nawaz (PML-N) party lost an election last Wednesday to rival Pakistan Tehreek-e-Insaf led by former cricket hero Imran Khan.

His brother Shahbaz, who heads the party now, has rejected election results along with other parties who have demanded fresh elections and announced they would protest against alleged election rigging. 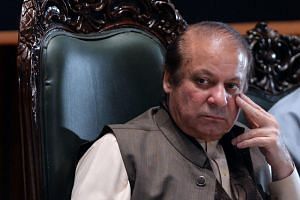 Khan's victory represents an end to decades of rotating leadership between the PML-N and the Bhutto dynasty's Pakistan Peoples Party that was punctuated by periods of military rule.

The powerful army, which is often accused of meddling in political affairs, ruledthe country for roughly half its history.