NEW DELHI - A wave of flooding has hit the Indian states of Assam and Uttar Pradesh, reported local media.

In a report published on Saturday (Aug 4) rains and thundershowers continued to lash most parts of Uttar Pradesh, while major rivers were in full spate, leading to fears of floods in several districts, reported Press Trust of India.

Uttar Pradesh's Chief Minister Yogi Adityanath undertook an aerial survey of the flood-hit areas of Lakhimpur Kheri on Saturday and instructed authorities to remain on high alert to provide swift assistance to the needy.

In Assam, more than 40 have died since the first wave of flooding hit in June, reported Times of India.

The Press Trust of India reported last week the flood situation in the northeast deteriorated sharply on Thursday (Aug 2) as the deluge spread to eight districts of Assam affecting more than 100,000 people, while Nagaland chief minister Neiphiu Rio sought immediate central assistance to tide over the crisis in his state.

The flood situation remained grim as the mighty Brahmaputra river and its tributaries were flowing above the danger mark, Assam Disaster Management Authority said.

More than 5,000 hectares of agricultural land have been inundated, reported Press Trust of India. 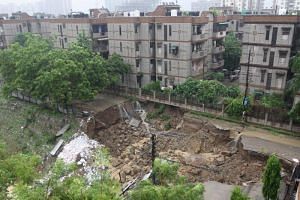 There were reports of embankments, roads, bridges and other infrastructure being damaged in Lakhimpur, Kamrup Metropolitan, Sivasagar and Sonitpur districts, it said.

Nagaland chief minister Rio urged the Prime Minister to grant immediate assistance to his state to battle the problems generated by the incessant rainfall hammering the past for a few weeks.

In a letter to Prime Minister Narendra Modi, Rio said it was becoming difficult for his administration to maintain adequate supply of essential commodities, including petroleum products, in district headquarters as stocks have depleted and connectivity via land route was severed at some places.