DHAKA • Parts of the Bangladeshi capital ground to a halt for the seventh day running yesterday, as thousands of students staged protests calling for improvements to road safety after two teenagers were killed by a speeding bus.

The authorities have pleaded with demonstrators to call off protests that have nearly paralysed Dhaka and prompted foreign embassies to issue travel alerts.

Teens as young as 13 were seen on Dhaka's notoriously clogged roadways checking whether cars and buses had valid licences and were in a roadworthy condition.

"We want justice," the students chanted as they gathered in some of Dhaka's main public squares.

"We won't leave the roads until our demands are met. We want safe roads and safe drivers," said protester Al Miran.

Anger has simmered since a speeding bus killed a boy and girl last weekend. 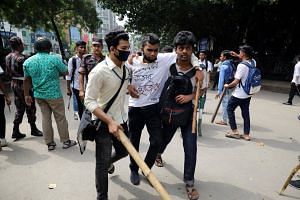 Bangladesh's transport sector is widely seen as corrupt, unregulated and dangerous, and news of the teenagers' deaths became a catalyst for public anger after spreading rapidly on social media.

An insensitive comment by Mr Shajahan Khan, a government minister with ties to powerful transport unions, poured oil onto the fire.

Mr Khan questioned why there was such an uproar over the two Dhaka children but no reaction when 33 people were killed in an Indian bus crash the day before.

There have been widespread social media demands for the minister's resignation despite his subsequent apology.

The Education Ministry shut down high schools last Thursday in an effort to quell unrest, promising students their demands for road safety reforms would be considered.

Several powerful ministers pleaded with students to return to their classes, amid worries the unprecedented teen outrage could turn into widespread anti-government protests ahead of a general election due later this year.

The government of Prime Minister Sheikh Hasina has ruled Bangladesh since 2009, but in recent months it has been shaken by mass protests demanding an end to a decades-old system of discriminatory civil service recruitment.

Dhaka suffers from daily gridlock but congestion has been exacerbated by blockades set up across the city since last Sunday.

The embassies of the US and Australia warned of significant delays and disruptions as a result of the protests across Dhaka and elsewhere in the country.