In its editorial on Oct 9, the paper urges former Prime Minister Nawaz Sharif and his party to refrain from initiating measures to clip the powers of the judiciary.

ISLAMABAD (DAWN/ASIA NEWS NETWORK) - Upon the indignity of disqualification has been heaped further humiliation.

The detailed judgement dismissing the review petitions filed by Nawaz Sharif and his family makes for devastating reading. Not only has the court reiterated its total belief that it acted rightly to disqualify Mr Sharif for omitting to declare a nominal salary, it has also called into question the former prime minister's character, intentions and competence.

The tone and tenor of the detailed judgement will likely leave legal purists uncomfortable, with the harsh language and condemnation often veering away from strictly legal interpretations.

It had been hoped that the Panama Papers case would lay down good law that could, because of sound legal reasoning, go on to become easily citable as sound precedent, but that is arguably not yet the case.

For Mr Sharif, however, the problems continue to mount. While his demeanour and rhetoric had suggested that he did not expect to receive a sudden reprieve in court, his path to a return to front-line politics continues to narrow.

Perhaps Mr Sharif ought to reflect on his own mistakes that have allowed a political crisis to consume the country for more than a year and a half.

Once the Sharif family was enmeshed in the Panama Papers revelations, it was imperative that the then prime minister give a complete and candid account of his family's wealth and assets. 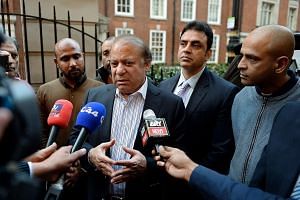 Instead, Mr Sharif chose the path of obfuscation, evasion and delay.

Neither was Mr Sharif willing to submit to political scrutiny in parliament nor was he able to provide satisfactory answers once the matter had shifted to the Supreme Court.

Mr Sharif did not appear to realise that the democratic project was at an inflection point and that his personal conduct would determine whether democracy was strengthened or weakened in the country.

Even now, Mr Sharif appears unwilling to acknowledge the legal dimensions of his political troubles, having forced a return as president of the PML-N while his accountability court trial continues. At some point, Mr Sharif will have to acknowledge that the democratic project is more important than the political fate of any given individual.

If he does not, an already worrying political crisis in the country will deepen.

What Mr Sharif must surely avoid is the further introduction of person-specific legislation to help circumvent his legal troubles. Nor must the PML-N make any attempt to somehow clip the powers of the superior judiciary.

With a historic third consecutive on-schedule election less than a year away, the PML-N has an opportunity to convince the electorate that it deserves another stint in power.

A fresh mandate, if the PML-N receives one, could help clear the uncertainty that has engulfed the political landscape, while failure to win re-election would render moot a debate on Mr Sharif's political future. The paramount interest is continuity of the democratic process.

Dawn is a member of The Straits Times media partner Asia News Network, an alliance of 23 news media entities.