As air pollution worsens, MNCs find it hard to coax employees to move to Indian capital

Even as talks to tackle climate change got under way in Paris last week, the Indian capital New Delhi was engulfed in choking smog.

"No soccer today," said Mrs Tina Chadha, a 30-something homemaker, firmly to her two sons, both aged under 10, at their home last Monday. They protested but she stood her ground.

Two days later, the air was ever so slightly better. "You can play, but only if you agree to wear masks," the American woman married to an Indian told them. 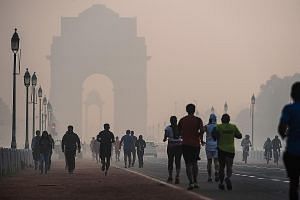 India CJ will take bus to work, to back plan to curb smog 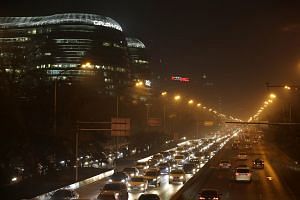 India CJ will take bus to work, to back plan to curb smog

On the football pitch, the Chadha boys were not the only ones wearing masks. It is a sight that is becoming increasingly common as parents, both expatriate and Indian, protect their children against the toxic air in the city.

The difference between the local and foreign parents is that most Indians do not have the option of leaving. Expats do and anecdotal evidence suggests that many, particularly those with children, are moving away.

Last year, the World Health Organisation (WHO) declared New Delhi to be the most polluted city in the world, ahead of Beijing.

The quality of the city's air has been deteriorating particularly in the past few years as development of the city and its surrounding areas has accelerated. Studies show that toxins such as benzene are 10 times higher than the acceptable level. It is not just the fumes from the eight million to nine million cars that is causing the bad air, but also construction dust and smoke from brick kilns just outside the city. And November tends to be worse than normal owing to more wood and coal fires as the weather turns cold, and farmers in the nearby state of Punjab burning their paddy stubble to prepare the fields for the next crop.

The Delhi government last Friday announced a measure to reduce the city smog, with vehicles with odd and even number plates allowed into the city on alternate days from Jan 1.

But many expatriates have chosen to escape Delhi's bad air, a high-profile example being that of New York Times correspondent Gardiner Harris, who wrote in an article in May that his young son's respiratory distress  forced him and his wife to leave India. Some expats, like Mr Jack Leenaars, who is Dutch and runs a company called DelhiByCycle, recently moved to Goa on the Indian west coast with his wife and three children. Others have sent their families back home to places as far away as Toronto.

Joining the exodus is photographer Simon de Trey-White, 55, who is taking his Indian wife, Ashim, back to England in March. For 18 months, he has been wearing a face mask whenever he went out.

"During the summer, the heat keeps you inside and now in the winters, the pollution is keeping me indoors. It's no life being trapped inside. The professional satisfaction I get from working in India just doesn't compensate for the appalling air quality," he says.

In all, about a dozen journalists and photographers have become "environmental migrants" in the past 18 months, abandoning the city for home or other cities with better air.

Known as a "hardship posting" for diplomats because of issues such as infrastructure and sanitation, New Delhi has become even harder to live in because of the pollution.

"Many embassy personnel want to return home," said Ms Dhyan Summers, who runs an online counselling service for expatriates in India. Some multinationals are struggling to persuade employees to move to New Delhi and stop those already there from leaving, she added.

Ms Summers herself had moved from New Delhi to Oregon City in California in September. "The pollution had become so bad I couldn't justify staying because I knew I could be taking years off of my life."

But there are those who choose to stay, for compelling reasons. "I am here for work and for love. I cannot leave," says Italian Nadia Bonfina, 45, head of marketing and sales for the L'Opera patisserie chain.

Others like Mrs Chadha are trying to make the best of the situation. She helped form an education and awareness group called Care for Air a few months ago to educate students, teachers and parents about air pollution.

"Through Care for Air, we hope to create a groundswell of community awareness and activism to create real change. This is a health and economic emergency," she says.